Although there are many kinds of buttons, by most accounts National Button Day celebrates buttons that are used on clothing, for ornamentation or as fasteners. The first buttons were used for ornamentation and seals, and have been found in the Indus River Valley (c. 2800-2600 BCE), China (c. 2000-1500 BCE), and ancient Rome. The oldest known button—dating to 5000 BCE—was made from a curved shell and found in the Indus River Valley. Buttons that function as fasteners, along with buttonholes, didn't come about until the 13th century, where they first appeared in Germany, and spread throughout Europe. They have been made from almost every material, their composition often reflecting the popular materials of the era in which they were made. Today they are most often constructed out of hard plastic, metals, seashells, or wood. They have been created by artisans, artists, and craftspeople, out of raw materials or found objects such as fossils, or from a combination of both. They have been made in small quantities, or in large scale quantities at factories.

Hughes is a projected second-round pick in next week’s NBA Draft after leading the Orange to an 18-14 campaign last season. His departure puts more weight on the shoulders of the SU’s backcourt duo of Buddy Boeheim and Joe Girard III to make Syracuse a formidable contender in the ACC.

How far do you think the Orange can go this season? Here’s what some of the experts predict:

Based on recent interviews, it seems that Syracuse basketball is prioritizing 2022 four-star wing Ty Rodgers.

Here’s the latest on Rodgers’ recruitment, based on his talk with Weingarten as well as other articles that I’ve read on the talented 2022 player.

Rodgers says he hears the most from “Syracuse, Michigan, Houston, Marquette, Rhode Island, Ohio State, Missouri, and even though they haven’t offered yet, Vanderbilt.”

In addition to Temple, newer teams to express interest in Rodgers are Louisville, South Carolina, Texas and Texas Tech, he told Weingarten.
...

The Syracuse basketball 2021 class is small, with just a sole commit in elite small forward Benny Williams. But what this cycle for the Orange lacks in quantity, it totally makes up for in quality.

Williams is a consensus four-star prospect in the 2021 class according to the primary recruiting services, and rates him as five stars and No. 22 nationally in this cycle.

Of the other main recruiting Web sites, he’s ranked no lower than No. 51 overall in the class of 2021. If the 6-foot-8 Williams, a senior at the IMG Academy in Bradenton, Fla., shines during the upcoming campaign, it’s entirely possible that he can make his way toward top-10 status in the 2021 cycle.

That, in turn, would put him in the company of ‘Cuse legend Carmelo Anthony as some of the highest-rated recruits for the Orange program over the past two decades.
...

As I’ve said on several occasions, Lindsay is really under-rated on a national scale within this class, and hopefully Syracuse basketball offers him a scholarship soon.

Copeland, meanwhile, received his offer from the Orange on Friday, according to multiple reports, which the talented 2022 player confirmed via his Twitter page.

For the moment, not all of the main recruiting services rank Copeland, but I expect that to change. The 247Sports Composite rates him No. 170 overall in the 2022 cycle, as well as the No. 27 combo guard and the No. 9 prospect in the state of New Jersey.

The 247Sports recruiting service has Copeland as the No. 28 combo guard and the No. 9 player in New Jersey.
...

Syracuse basketball got in relatively early with 2022 five-star guard Zion Cruz, which is a good thing, although other teams appear to have more buzz with the top-25 player at this juncture.

What’s more, the scholarship offers and interest from a range of impressive squads are only expanding for Cruz, who is a junior that recently transferred from the Oak Hill Academy in Mouth of Wilson, Va., to The Patrick School in Hillside, N.J.

national basketball analyst Rob Cassidy, citing sources, writes in an article that “Florida State has positioned itself well” with Cruz.

The Seminoles captured the 2019-20 Atlantic Coast Conference regular-season crown and are expected to reside in the league’s top four during the upcoming campaign. Additionally, FSU has generated a lot of strong success on the recruiting trail of late.

As it relates to Cruz and Florida State, Cassidy says that although the recruiting process is early on between the two parties, head coach “Leonard Hamilton and his staff have made an early impression. That should count for something, as FSU will likely be involved to some extent until late in the process.”
...

5 NBA Draft Prospects Who Have Fallen Under The Radar (clutchpoints.com; Stratakos)

LaMelo Ball, James Wiseman, and Anthony Edwards headline the 2020 NBA Draft class, and understandably so. The prospect of teams trading up for one of those players, as well as trading back given the close proximity of several lottery prospects has also been discussed at length.

Given the above storylines, many players have camouflaged into this NBA draft class, garnering little attention. Some of those players are justifiable lottery selections.

Here are five NBA prospects who have fallen under the radar and will be steals wherever selected.

Hughes went out with a bang, averaging 19.0 points per game in his senior season at Syracuse. The 22-year-old makes an impact across the board offensively. He’s fast off the dribble, a respectable shooter, and a physical specimen when it comes to finishing above the rim.

Sure, there’s always a lot of scorers in an NBA Draft. That said, Hughes is on a trajectory to be a rotation staple at the next level. He was more impactful and productive across his two years at Syracuse after one season at East Carolina and another in the transfer portal. NBA teams are trying to outscore each other like never before. Hughes can only help in that regard.

He’ll come in and be an unheralded source of offense off a team’s bench in his rookie NBA season.
... 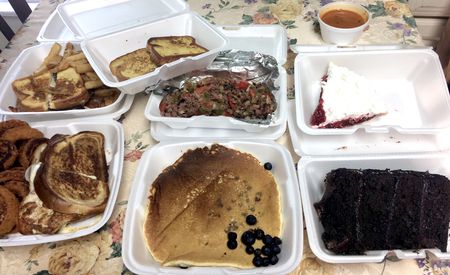 Finally Ours on Onondaga Hill: Trying takeout from an excellent diner (Dining In Review) (PS; $; Woodman)

One of the features we liked most about Finally Ours when we reviewed it in 2017 was the unusual level of comfort and relative quiet in the dining room. We would miss that this time, as we ordered takeout from the extensive (but not expensive) breakfast and lunch menu. We only hoped we would still be as happy with the food.

We ordered several dishes to see how well their quality would be preserved as takeout, including breakfast (offered all day) and lunch items. We skipped offerings that would predictably travel poorly, like sunny side up eggs, hot gravy-topped sandwiches, and ice cream sundaes.

When we reviewed Finally Ours a few years ago, we tried the sweet cream pancake, which was somehow rich and light simultaneously. Our blueberry pancake, which didn’t suffer much from the short ride home, was less like dessert but, with our own maple syrup (the bags of food held none) and a sprinkling of fresh berries to complement those cooked in, it was very good.
...