Dr. Henry Heimlich came up with the Heimlich Maneuver in 1974. Also known as abdominal thrusts, this procedure is used to dislodge food and objects from the throat of a choking person. As the American Red Cross claims over 3,000 deaths are caused by choking each year, celebrating Heimlich Maneuver Day is an important way to raise awareness and help save lives. The origin of the day is unknown.
How to Observe Heimlich Maneuver Day

The best way to celebrate the day is to make sure you know how to use the maneuver just in case you find yourself in a position where someone is choking nearby. You can get certified with the technique through the American Red Cross. You also could teach others how to use the maneuver after learning it. This also is a good day to remember to fully chew your food. 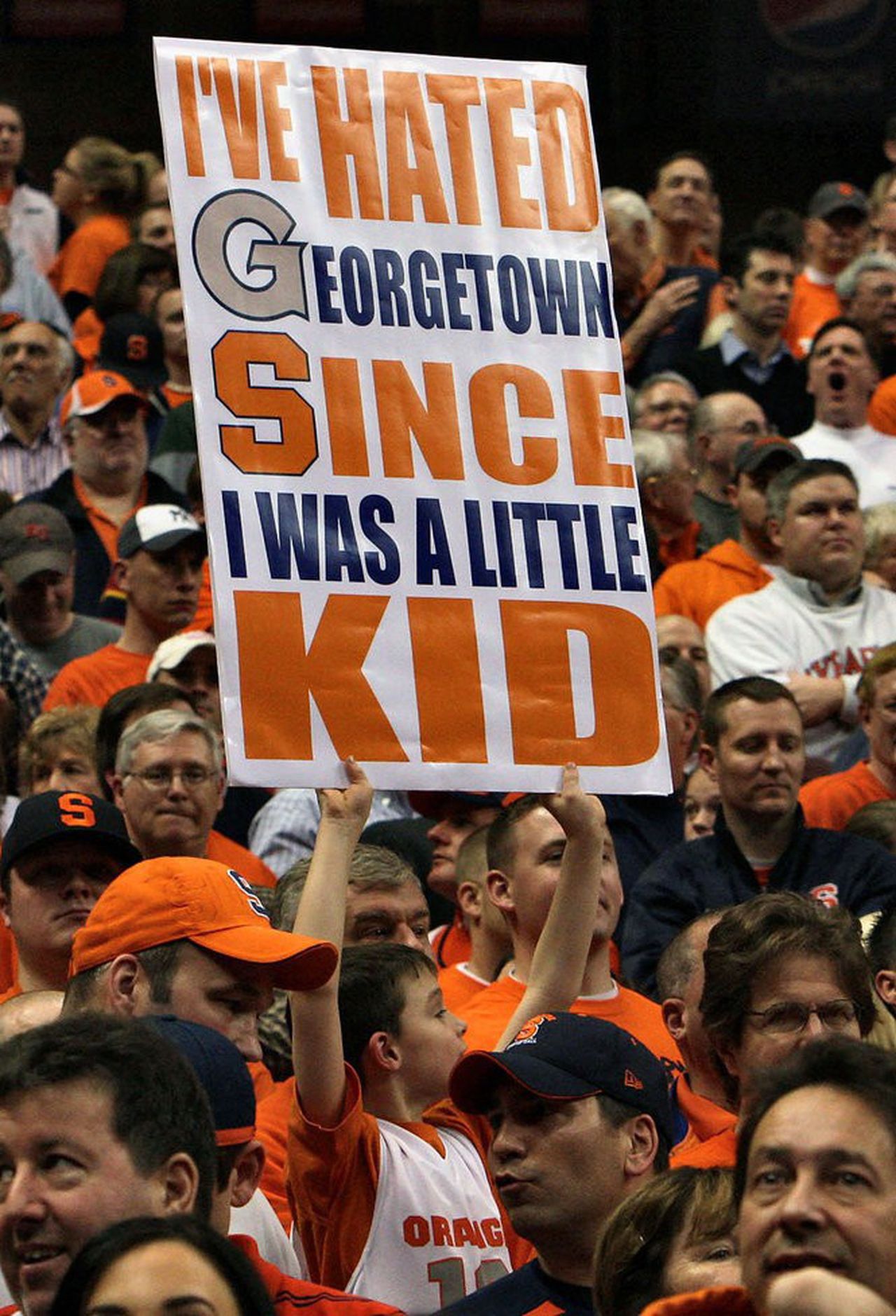 A young Syracuse fan holds up a sign proclaiming how long he has hated the Georgetown Hoyas.

Axe: SU-Georgetown lives on, but is the sunset approaching? (PS; $; Axe)

I’ll always be on board for Syracuse vs. Georgetown.

No matter the time, no matter the status of college basketball, I’m always in on throwing another log on the fire of Syracuse’s most historic rivalry.

I also recognize that a series that once roared as a bonfire is dwindling to the point where I wonder if the coals are still hot enough to make s’mores.

The latest matchup, announced on Tuesday, will commence on Saturday, Dec. 10 at the JMA Wireless Dome.

It will be the 98th matchup between the Orange and Hoyas. Georgetown is the fifth-most familiar opponent in program history for the Orange. Syracuse leads the series, 52-45.

The first matchup was in 1930, when the Orange defeated the Hoyas 40-18 in Syracuse’s Archbold Gym.

The latest, a typical back-and-forth affair that featured 11 lead changes, was a 79-75 victory for Georgetown last December.

No one is saying to keep this series going just for the sake of history.
...

Class of 2024 wing Damarius Owens plays for Western Reserve Academy in Ohio but is a Rochester (NY) native. The 6-7 forward runs with the City Rocks for AAU ball on the Nike EYBL circuit. Class of 2024 prospects generally do not run with the main squad, with some exceptions. When they do, often they play reserve roles with minimal minutes. Owens, on the other hand, is starting to play a more prominent role with the City Rocks and had a strong weekend at the EYBL Louisville session.

"It felt great to step up and make my coaches and teammates proud," Owens said. "I think the biggest key was stay ready. My plan is to always play aggressive and do whatever I can to help my team win games when my name is called."

Owens currently holds offers from Cincinnati, Creighton, UMass, UMBC, Siena and Syracuse. Syracuse's offer came in early April and he was ecstatic to get it.
...

I haven’t seen anything about an official scholarship offer made by the Orange to the 6-foot-3 Givens. The ‘Cuse has doled out offers to a range of top-flight prospects in this cycle, and I’d love to see Syracuse basketball extend an offer to Givens.

According to both the 247Sports Web site and , the Orange is listed as having interest in Givens. He has received more than a dozen offers from various high-major programs, in addition to reported interest from the ‘Cuse and other impressive suitors.

Givens, who has been suiting up for a prep school in Tennessee, recently announced on social media that he would transfer to the country’s No. 1 prep-school squad.

The 247Sports Web site and state that he also holds interest from college squads including the Orange, Duke, Kansas, Houston and Oklahoma State.

Numerous recruiting services rate Givens as a four-star prospect in the 2024 class, as well as within the top-75 nationally and a top-10 point guard in this cycle.

Over the Memorial Day weekend, Nike’s EYBL league on the AAU circuit held a session in Louisville, Ky. Givens, suiting up for the Overland Park, Kan.-based MoKan Elite, tallied multiple games where he scored 20 points or more.
...

Brent discusses how relevant the Syracuse Georgetown rivalry is in today’s era of college sports. Later, Brent reacts to Syracuse’s 990 forms, showing how much various members of the athletic department were paid in 2020.

Consensus 2023 four-star wing Gavin Griffiths, who holds a Syracuse basketball offer, plans to reveal his collegiate destination this Thursday, according to a media report.

On3 national analyst Joe Tipton said via Twitter that the 6-foot-7 shooting guard/small forward will announce his college choice on Thursday, June 2, at 3 pm.

If the analyst projections hold true, it’s looking like Big Ten Conference squad Rutgers may be getting some good news as it relates to Griffiths’ recruitment.

As of Tuesday evening, I counted at least five predictions for Griffiths in the direction of the Griffiths via the 247Sports Web site, the On3 Web site and .

Per reports, Griffiths had previously taken an official visit to Iowa, and he also made unofficial visits to UConn, Providence and Rutgers.
...

ESPN's Jeff Borzello, who put the list together, had this to say about the Cavaliers:

The highest-ranked team on our list that didn't make the NCAA tournament last season, Virginia's ranking reflects a combination of much-improved depth and versatility on the Cavaliers' roster and the idea that back-to-back down years seem unlikely to happen to Tony Bennett. All five starters are back from last season, but Virginia is also adding essentially an entire second line to the roster, which will dramatically improve Bennett's options. All-MAC forward Ben Vander Plas could make the biggest immediate impact after averaging 14.3 points at Ohio last season, but it's the quartet of freshmen -- ESPN 100 prospects Isaac Traudt, Isaac McKneely, and Leon Bond, and four-star recruit Ryan Dunn -- that should begin to form the core for the next few years. How quickly the newcomers adapt defensively is likely the biggest question.
Expand...

From a team that went 21-14 and advanced to the quarterfinals of the National Invitation Tournament in 2021-2022, Virginia is set to return its entire starting five and its stop six scorers, led by All-ACC Third Team forward and leading scorer Jayden Gardner (15.3 ppg). The Cavaliers have also added Ohio transfer Ben Vander Plas, who averaged 14.3 points and 6.8 rebounds per game and was named to the All-MAC First Team last season. UVA will also bring in the nation's 11th-best 2022 recruiting class (per 247Sports) that includes a foursome of four-star prospects in Isaac Traudt, Isaac McKneely, Leon Bond, and Ryan Dunn.
...

Terquavion Smith, who created a lot of buzz at the NBA draft combine in Chicago earlier this month, announced Tuesday morning that he will return to N.C. State for his sophomore season. Smith made the announcement in a video posted on his Instagram account.

“The job’s not done,” Smith said in the video. “Let’s get to work.” Smith, a projected first-round pick, thanked his agency and N.C. State fans for being supportive as he went through the draft process.

“Last year is in the past,” Smith said. “This year is fitting to be a movie. Let’s go to work.” Smith threw up the Wolfpack hand sign and the video ended with “I’m back” on the screen.
...

Finally good news for NC State Athletics as Terquavion Smith decides to return to NC State in lieu of going to the NBA. The young Guard from FarmVille, NC decided he'd like to be a college student just a little bit longer and wait on his big pay day that many felt like he was set to make as a potential first rounder. 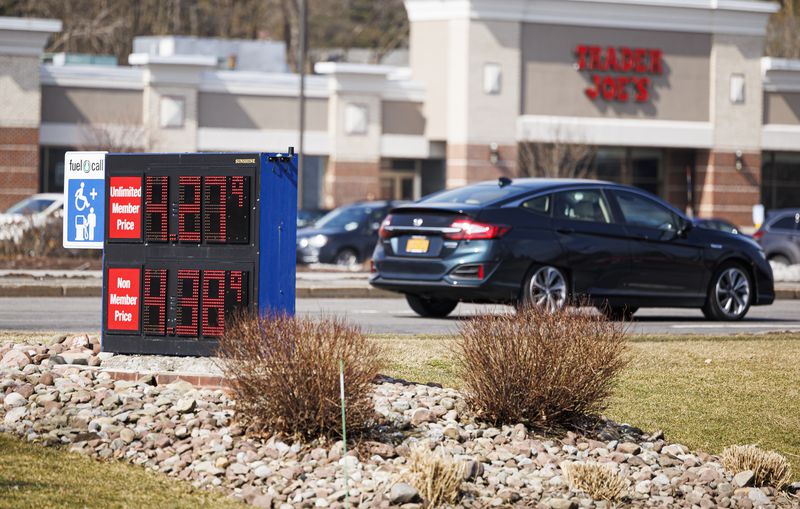 New York will suspend some of its gas taxes starting tomorrow.

State lawmakers passed the tax break as part of the budget in April. The suspension lasts from June 1 until Dec. 31 and covers both the 8-cent per gallon motor fuel tax and 8-cent per gallon sales tax on gasoline.

The total tax break of 16 cents a gallons will save consumers about $2 on a 12-gallon fill-up.

The suspension will cost the state over $580 million in lost revenue.

In addition to the state-level break, Onondaga County voted in April to cap its sales tax on gas at 12 cents a gallon, also starting June 1. The cap expires Nov. 30.

The county taxes gasoline purchases at its regular 4% sales tax, which comes to 12 cents a gallon for gasoline purchased at $3 a gallon. With the cap in place, the sales tax won’t rise beyond that amount, regardless of how high the price of gas rises.

Oswego County also capped its sales tax for gas at 12 cents a gallon.

The Oneida Indian Nation has announced it will suspend its gasoline tax for the rest of 2022 at all Maple Leaf Market and SavOn locations in Oneida and Madison Counties.

The current average price for regular gas in Syracuse is $4.857 a gallon, according to AAA. The statewide average is $4.927.

Here’s how Onondaga County Democrats want to spend $85 million instead of building an aquarium (PS; Breidenbach)

Democrats in the Onondaga County Legislature today released their own plan to spend the $85 million County Executive Ryan McMahon wants to use to build a new aquarium.

They held a rally this morning outside the Onondaga County Courthouse, 401 Montgomery St., Syracuse. They called it “Rally for our Kids.”

McMahon, a Republican, has proposed spending $85 million in surplus cash to build an aquarium at the Inner Harbor in Syracuse. He has been unable to win over enough legislators since October, when the aquarium was first proposed. McMahon has said he wants to push the project to a vote in the legislature in June or July. He needs 9 of 17 legislators to vote yes.

Legislator Bill Kinne, D-Syracuse, shared an alternative plan. It includes $40 million to address lead paint poisoning in children, including $30 million to remove lead paint from homes. It would also expand testing kits and provide temporary housing assistance for families while their homes are remediated.

The number of children exposed to high levels of lead paint increased during the Covid-19 pandemic and is expected to increase as more children get their routine checkups this year.

A total of 396 children tested showed elevated blood lead levels in 2021- an 11% increase from 2020, when 356 city children were identified with lead poisoning, according to the county health department

The alternate plan would also spend:
...