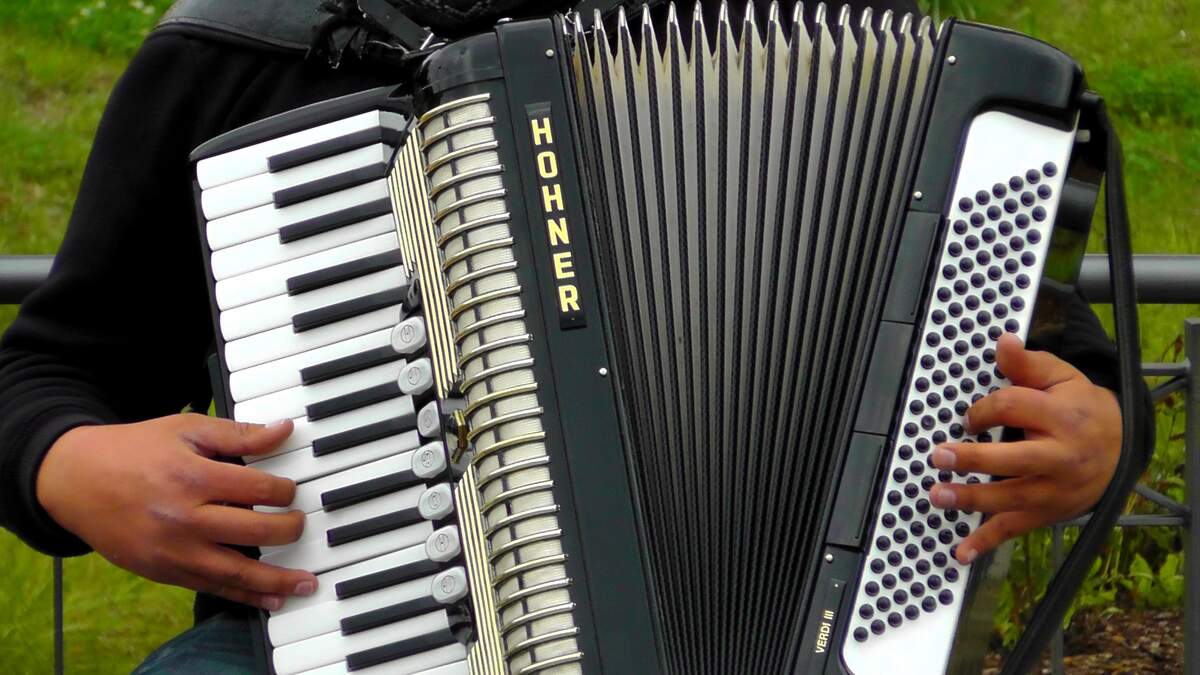 The sound of an accordion and the sight of dancers moving across the floor―it could only mean one thing: polka! Polka is both a genre of music and a type of dance, and today we celebrate both. So strap on your dancing shoes, and open your ears to a sound that has stood the test of time!

First, the dance. Polka originated in Bohemia, which is now part of the Czech Republic. "Polka" likely comes from a Czech phrase for "half-step," which refers to the short half-steps (or hops) in the dance. There are various iterations of a story in which a peasant girl named Anna Slezak ( or Slezáková) came up with the dance, either in 1830 or 1834. A music teacher named Josef Neruda saw she was dancing to a traditional folk song—"Strýček Nimra koupil šimla," or "Uncle Nimra Bought a White Horse"—in a unique way. Slezak called her dance Maděra, and Neruda taught young men to dance to the song in the way she had. From there, the dance made its way to ballrooms.

Brad Klein, one half of the Locked On Syracuse Podcast, joins Steve and Paulie to discuss his chat with JP Estrella over the weekend, his Syracuse Football wish list on both sides of the ball, and who will be taking over for him as he transitions into calling games for Western Kentucky University.

Brad Klein, one half of the Locked On Syracuse Podcast, joins Steve and Paulie to discuss his chat with JP Estrella over the weekend, his Syracuse Football wish list on both sides of the ball, and who will be taking over for him as he transitions into calling games for Western Kentucky University.

AllSyracuse.com publisher Mike McAllister joins Steve and Paulie to give an update on JP Estrella’s recruitment, reveal the newest member of the Syracuse women’s basketball team, and give some thoughts on the first week of Syracuse Football practice.

At the beginning of September, Syracuse basketball 2023 high-priority recruiting target Joseph Estrella plans to reveal his collegiate destination, he said via social media on Monday.

The rapidly rising four-star big man, a 6-foot-11 power forward/center, is fresh off an official visit to the Hill. According to numerous media reports, his trip to Central New York went quite well.

To date, Estrella has made official visits to the ‘Cuse, Iowa, Tennessee and Marquette. While he’s secured more than 20 scholarship offers throughout his recruitment, the chatter that we’re hearing is Estrella doesn’t plan to take any more official visits.

In his Instagram post, Estrella said that he will announce his commitment on September 2 at the XL Sports World in Saco, Maine. He said that he also expects to trim down his list of contenders over the next several weeks.

Per reports, Estrella is likely to end up picking one of the schools that he officially visited, although things can ebb and flow in the recruiting processes of top-flight prospects.

Based on reports, analyst comments and other things I’ve read in a variety of fan forums, I’m getting the sense that the top-three contenders for Joseph Estrella, in no particular order, are Syracuse basketball, Iowa and Tennessee.

As is well-documented, the Orange coaching staff was the first to offer a scholarship to Estrella, with that offer coming in August of 2021 at the team’s annual Elite Camp.

Estrella has said more than once that the ‘Cuse offering him first means something, but that alone isn’t going to seal the deal for Syracuse basketball.
...

Boeheim, the long-time Orange leader who is always candid in his comments with the media, doesn’t appear to be a big fan of conference realignment. His thoughts, of course, stem from the recent decisions by Southern California and UCLA to bolt the Pac-12 Conference for the Big Ten Conference.

And those recent developments come after Oklahoma and Texas elected to depart the Big 12 Conference for the Southeastern Conference, with a lot of speculation that the Big Ten and the SEC will ultimately dominate every other league out there, including the Atlantic Coast Conference.

"We talk about it… and then football schools do what they want to do."
Jim Boeheim tells @talkhoops and @DarthAmin how college basketball coaches try to stop super conferences#NBA2K23SummerLeague | @therealboeheim | @Cuse_MBB pic.twitter.com/TDqR9yMZSs
— SiriusXM NBA Radio (@SiriusXMNBA) July 12, 2022
Expand...

For now, though, the ACC isn’t going anywhere, because, as Jim Boeheim and many others have pointed out, conference realignment is about football and television contracts.

Excerpts of Boeheim’s recent interview with SiriusXM NBA Radio were provided in an article from Matt Howe on the 247Sports Web site.
... 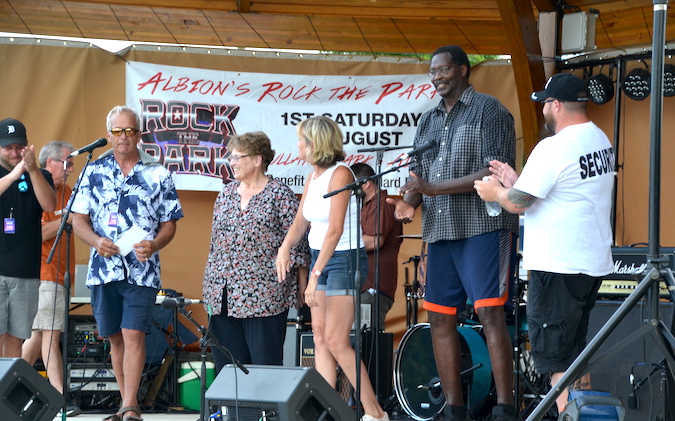 In early spring it was just an idea: building new basketball courts at Bullard Park.
The old court had cracks and heaves. The hoops didn’t even have nets.

Just a few months later, a $40,000 grant has been secured from the James and Juli Boeheim Foundation towards two new full-size courts at Bullard. There have already been several fundraisers, 3-on-3 tournaments and the backing of the Village Board to push for the new courts.

The $40,000 grant was announced on Saturday afternoon during Rock the Park – Albion Summer Music Festival.
Ron Albertson, one of the Rock the Park leaders, said grants have been critical to making improvements at the park a reality. That includes the new splash pad, amphitheater, playground equipment, and a utility building with bathrooms and a pavilion. The village Department of Public Works has also provided in-kind work with utilities and site work.

The basketball courts could be ready next year, said Village Trustee Tim McMurray, who is part of the Bounce for Bullard Committee. Village officials need to see how in-kind services from the village DPW could be used as a local share to help secure more grants. McMurray said he wants to hear from DPW Superintendent Jay Pahura on how the DPW could assist with the project and how it would fit into the DPW schedule.

Albion also is working with the United Way of Orleans County to pursue a grant from the Ralph C. Wilson Jr. Foundation towards the courts, which could total $150,000 to $200,000.

The $40,000 would likely cover the costs for the courts, but the Bounce for Bullard would like to have fencing, bleachers, lighting and other amenities with the project.

The village needs to get solid cost estimates on the project, and determine how much in-kind work is needed. But McMurray said he is happy with the progress so far.

The United Way not only assisted Albion in writing the grant to the Boeheim Foundation, it helped Albion set up a non-profit organization, the Greater Albion Community Recreation and Events Corporation, Inc. The organization is better able to apply for grants and has a better chance of receiving funding than a municipality.

Roosevelt Bouie, a Kendall graduate and Syracuse University Hall of Famer, also was a key in advocating for the funding from the Boeheim Foundation. Bouie was Boehim’s first star recruit and helped the team to a 100-18 record from 1977-1980. His number 50 has been retired by Syracuse.

Bouie said he learned to play basketball at Bullard as a kid, often with intense pickup games. Bouie was eager to help support the effort for better basketball courts at the park.

His friend Steve Mowers at CRFS connected Bouie to Nyla Gaylord at the United Way, and the organization helped pursue the grant applications and form the non-profit.

“We applied to the Boeheim Foundation and now have the start of a significant project that can really give the community something to be proud of,” Gaylord said. “So, now we are applying to the Ralph C. Wilson, Jr. Foundation. So, we are on the move.”
... 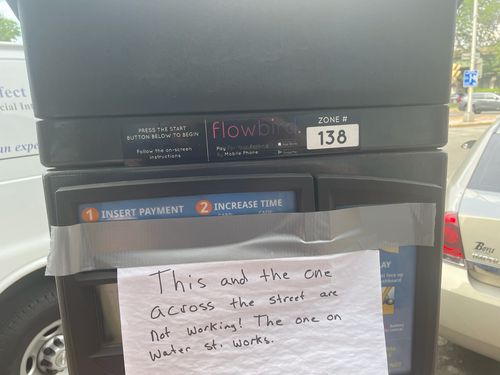 A parking meter outside the Sweet Praxis warns that it isn't working, and neither is another that sits nearby.

When Megan Therrien arrived at a downtown bakery for her first day of work, she tried to pay for parking at a meter just outside the Sweet Praxis bakery. She tried a credit card. Then a dollar bill. Then coins.

None of it worked.

She said she tried the same approach at five different meters, all unsuccessfully, before eventually paying to park further away in a private downtown lot.

Therrien’s experience last month is one city officials are hearing about more frequently, especially her inability to use a credit card. That’s becoming a source of swelling frustration among residents, visitors, businesses and city officials.

After motorists insert valid credit cards, many machines provide a digital warning that the card is invalid or the machine is out of order.

“We are painfully aware of it,” Syracuse Mayor Ben Walsh said.

On Friday afternoon, syracuse.com tested the same five meters that Therrien used. Three were still broken, including one with a hand-printed warning about its status. Two were working and accepting credit cards.

Corey Driscoll Dunham, the city’s chief operating officer, said she isn’t sure how many of the city’s 300 meters are broken because some of them, like the ones outside Sweet Praxis on South Warren Street, work intermittently, either because of repairs or unreliable wireless connections. The city bought many of its current stock refurbished in 2015 and 2016. It believes that most of its meters are about a decade old.
...