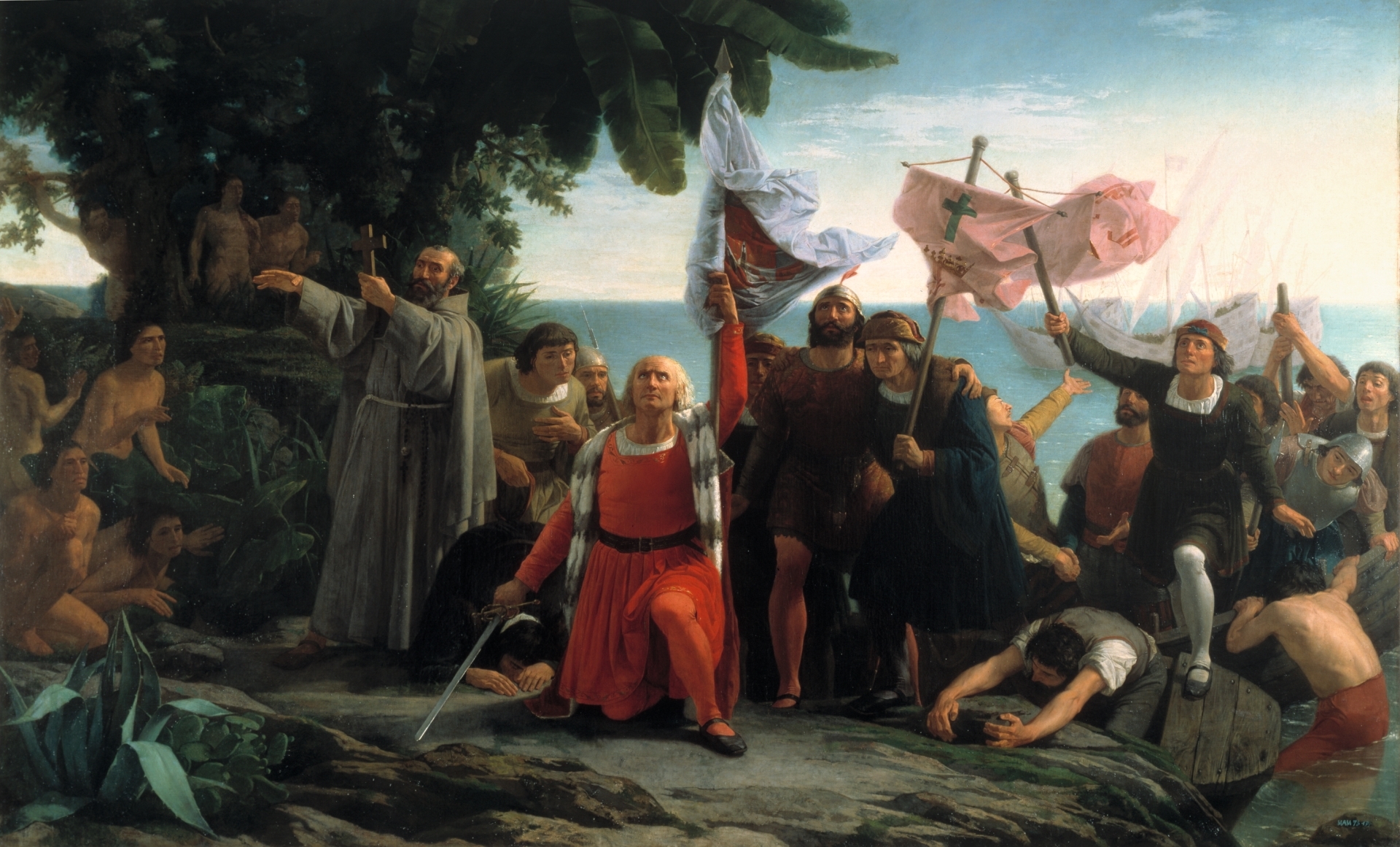 Columbus Day celebrates the landing of Christopher Columbus in the Americas on October 12, 1492. Columbus, who was financed by the Spanish monarchs, King Ferdinand and Queen Isabella, was attempting to find a western route to Asia—to China, India, and Asian islands with gold and spices. Instead, he landed in the Bahamas and became the first European to explore the Americas since the Vikings landed in Greenland and Newfoundland about 500 years earlier. Not only does the United States celebrate the day, but many Latin American countries observe it as "Día de la Raza," Spain observes it as "Día de la Hispanidad," and various other countries celebrate the day as well.

Indigenous Peoples' Day celebrates the culture, traditions, history, and contributions of Native Americans, and acknowledges that they were the first inhabitants of the Americas. Taking place on the same day as Columbus Day—the second Monday of October—the holiday also recognizes Columbus's atrocities and enslavement of Native peoples. A day to rethink history, Indigenous Peoples' Day exposes the irony of the belief that Columbus is the "discoverer" of the Americas, when people were there before him, and it acknowledges that the colonial takeover of the Americas began with him, which led to millions of deaths and the forced assimilation of Native peoples. Indigenous Peoples' Day started as an alternative holiday or counter-celebration by those opposed to Columbus, who believe that he represents the violent colonization of the Western Hemisphere.

Syracuse basketball players mingled with fans at Monroe Madness and none more so than Joe Girard (PS; $; Waters)

The Monroe Madness event at Rochester’s Blue Cross Arena ostensibly offered fans in the Lilac City the chance to see Syracuse men’s and women’s basketball teams up in a pair of intra-squad scrimmages.

In reality, Friday’s intimate gathering provided fans the opportunity to see the Orange players and coaches up close; so up close that hundreds of fans swarmed the court in search of autographs and photos with their SU players following the conclusion of the men’s Orange vs. Blue scrimmage.

Pity the poor security staffer who pleaded with fans to get off the court. There was no herding them anywhere as long as Joe Girard remained willing to sign whatever was thrust towards him; be it a program, a photo, a hat or even a sneaker.

“It’s good to get out there on the court and run up and down a little bit, but it’s more beneficial to get out there the fans,’' Girard said in a quiet hallways after finally leaving the court. “They get to see us a little bit more up close and personal. They get to talk to us after. It’s about the relationship with the fans and giving back to them.’'

Girard had company in the post-game autograph swirl. All the Syracuse players took the time to greet the fans. Syracuse senior center Jesse Edwards was a popular target of the autograph-seekers. Jim Boeheim began signing before his team even got on the court.

John Bol Ajak even recorded a Tik Tok for one young fan.
...

Brian Higgins recaps what could be the worst NFL game of all time before he gets Mario Sacco’s six-pack of picks. Later, he chats with Symir Torrence ahead of the Syracuse basketball season.

Next weekend could be a crucial weekend for Syracuse’s basketball team as well as the Orange’s football team.

While Syracuse’s undefeated and nationally-ranked football team will host North Carolina State next Saturday at the JMA Wireless Dome, the Syracuse basketball coaches have set up official campus visits for two key recruits in the 2024 class.

Damarius Owens, a 6-foot-7 forward, and Elijah Moore, a 6-foot-4 guard, are both expected to take official visits to Syracuse on Oct. 14-15. Both appear to be high priority recruits for the Orange.

Syracuse offered Owens a scholarship back in April. He attended SU’s Elite Camp in August. He holds offers from several schools including Alabama, Creighton, Marquette and Virginia Tech.

Moore attends Cardinal Hayes High School in the Bronx. He, too, attended SU’s Elite Camp. Among his many offers are ones from UConn, Seton Hall, Oklahoma State and Alabama.
... 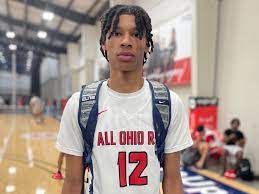 Syracuse basketball coaches have offered a scholarship to 2024 four-star point guard Jalik Dunkley from Canada, according to a recruiting service and a recent media report.

Recruiting Web sites list Dunkley as either a point guard or a small forward. On his Twitter page, Dunkley says that he is a 6-foot-7 point guard in the 2024 class.


Dunkley is a junior who attends Orangeville Prep in Mono, Ontario. On the AAU circuit, he runs with the Toronto-based Bounce Elite in Nike’s EYBL league.

Multiple recruiting services rate Dunkley as a top-100 overall prospect in the 2024 cycle.


Syracuse basketball has gotten into the recruiting mix for four-star PG Jalik Dunkley.​

Under his bio on , Dunkley’s list of scholarship offers includes the Orange, along with Washington State, Pittsburgh and Rhode Island. says that Dunkley is also receiving interest from Arizona and Mississippi State.

Dunkley echoed those offers and interest in a recent interview with national analyst Patrick O’Brien on phenomhoopreport.com. Additionally, Dunkley told O’Brien that he has garnered interest from the NBA G League.

I’m getting the sense that Dunkley’s recruitment is just beginning to pick up steam. Having an offer from the ‘Cuse and interest from Arizona is certainly impressive, and I’d imagine more suitors across college basketball will soon begin vying for Dunkley.

When I penned this column, had ranked Dunkley as four stars and No. 76 overall in the 2024 class. At the time of this writing, the industry-generated 247Sports Composite put Dunkley as four stars, No. 97 overall, No. 26 at small forward and No. 1 in Ontario within the junior cycle.

Over the summer, scouting service Phenom Hoops watched Dunkley compete for Bounce Elite. O’Brien wrote in part that this Syracuse basketball recruiting target “had such a strong feel for the game, impacting the floor as a big guard, finding ways to get downhill and create for himself or others, as well as his ability to finish over defenders.”
...

During the ACC’s annual spring meetings in May, the league’s men’s basketball coaches collectively vowed to promote the conference more aggressively. Bank on that campaign to commence Wednesday in Charlotte, N.C.

Just blocks from the ACC’s future headquarters — the office is relocating next year from Greensboro — coaches and players will gather for the league’s annual preseason media day. Such events are inherently optimistic, the ACC’s more so this year given its 2022 NCAA tournament performance and exceptional returning talent.

The conference’s five NCAA bracket reps from last season — North Carolina, Duke, Miami, Notre Dame and Virginia Tech — went a combined 14-5 in the tournament, with the Hurricanes reaching the Elite Eight, the Blue Devils the Final Four and the Tar Heels the national championship game. All five figure to remain contenders, while Virginia and Florida State likely ascend back to national prominence.

Essential to earning more NCAA bids — last season’s five were the fewest since the ACC expanded to 15 teams nine years ago — is winning more marquee non-conference games. ACC teams were a combined 4-16 versus ranked non-league opponents last season and also lost to opponents such as Navy, James Madison, Albany, Miami of Ohio, Furman, Wright State, The Citadel and Colgate.

This week is also when media vote on the conference’s projected order of finish, plus a preseason all-league team, Rookie of the Year and Player of the Year. So here we go.

NORTH CAROLINA: Welcoming back four starters from an NCAA runner-up is a luxury few programs have enjoyed in recent years, but thanks in part to name, image and likeness compensation, the Tar Heels’ roster, headlined by Richmond native Armando Bacot, is stacked.
... 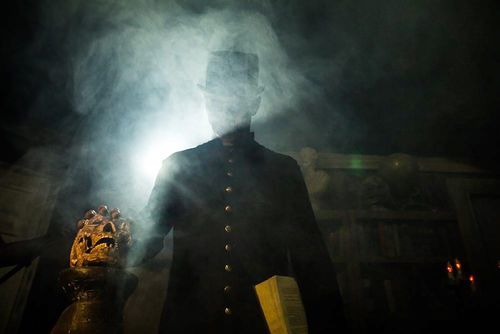 Central New York is home to one of the best haunted houses in America, according to an industry group.

Frightmare Farms Haunted Scream Park in Palermo, N.Y., was named one of the “Top Haunted Attractions” in the nation by the Haunted Attraction Association (HAA), the only official association in the haunt industry. It’s the only Halloween attraction in New York state to make the list, which recognizes members of the HAA that satisfy criteria such as protecting customers, promoting haunted attractions, and educating industry experts.

“This is a really great honor for our team as well as our community,” said Frightmare Farms production director Nicole Ginsburg. “We have been working for over a decade to elevate the local attraction standards not only from a performance and design standpoint but also safety. We are looking forward to another incredible Halloween season as well as debuting our new experiences!”

Frightmare Farms, voted the scariest experience by syracuse.com readers and recognized as the world’s first sensory inclusive haunted house, is about half an hour outside of Syracuse and features a haunted house, twisted labyrinth (“blood moon rising”), a condemned mine trail, and a haunted hayride through the forest, plus two brand-new “adrenaline rooms.” All are packed with detailed sets and professionally-trained actors. 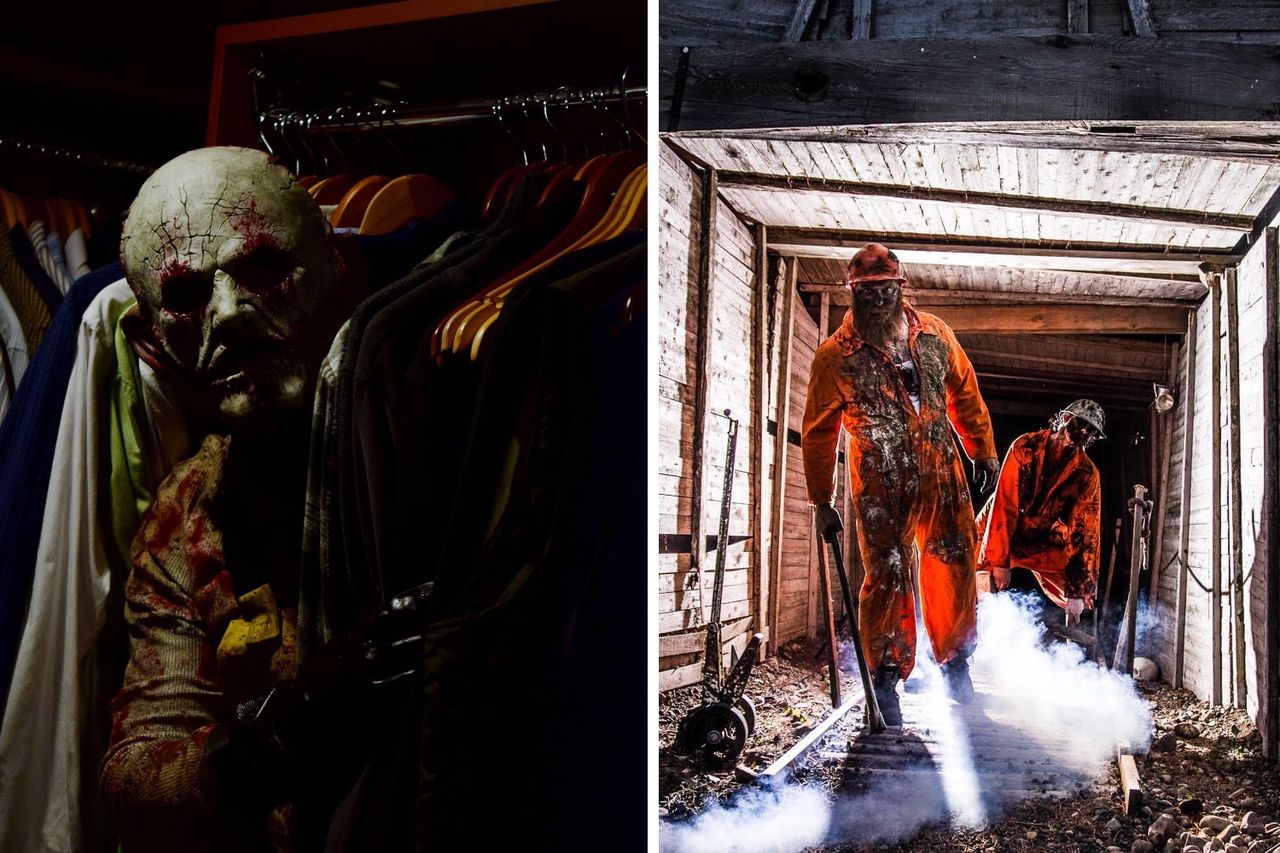 Other haunts that have received acclaim include Fright Nights in Syracuse, named one of the 20 best haunted attractions in the Northeast by USA Today; Crooked Descent Horror in Herkimer, one of the highest-rated haunted houses on thescarefactor.com; the Headless Horseman in Ulster, featured on the “Today” show and named the No. 1 horror attraction in America by hauntworld.com and USA Today; and Frightworld: America’s Screampark in Buffalo, named the third best haunted house in the U.S. by BuzzFeed.
... 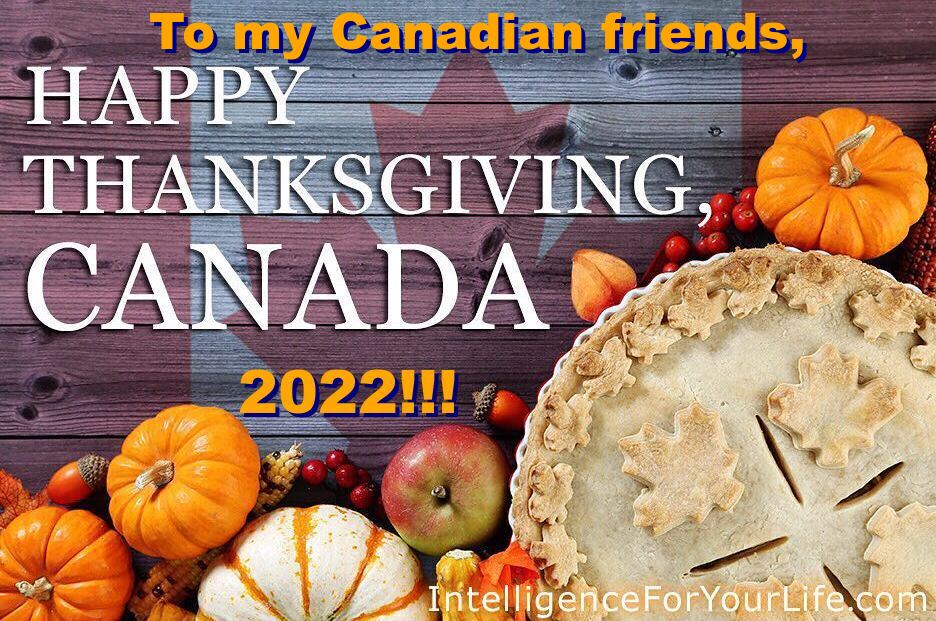 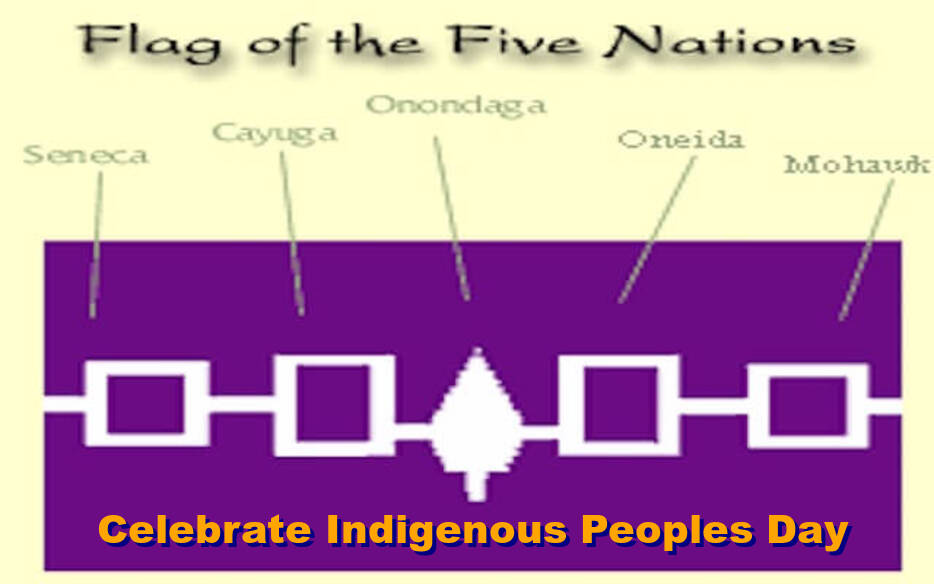