Change Ad Consent Do not sell my data So what uniforms do you like? | Syracusefan.com
Menu
Log in
Register
Install the app
You are using an out of date browser. It may not display this or other websites correctly.
You should upgrade or use an alternative browser.

We all know whose uniforms we don't like, but what are your favorites?

I like SU's. I even liked the all-orange ones for special occassions. But the blue jersies at home and white on the road with minimal artwork are fine. A smaller "S" might look better, or numbers instead of the "S".
http://a.espncdn.com/combiner/i?img=media/gettyphoto/2010\10\30\GYI0062259939.jpg

I like light colors when they are used both at home and on the road as Tennessee and UCLA used to do.

Floida State looks good, espcially when the pants and jersies are both garnet.

I like Nebraska , especially the red pants on the road. They used rings at one point, as well and it looked good.

I liked Wisconsin in the old days when the "W" was on the front and back of their helmets, which was different. I've always felt Michigan's odd looking helmet design was a bit over-rated.

I like Illinois and Florida when they go with the blue jersies because they look like us.

I like Missouri, in black but with the multiple stripes over their helmets.

I like Wyoming with the brown and yellow and the bucking bronco on the side.

I like San Diego State with the black and bright red colors. But I like their helmets better "clean", without all the logos.

I like Arizona State with it's dark maroon jersies and yellow helmets and pants.

I like the Spartans, (Michigan State) and Trojans (USC), when they keep it simple- just the warrior logo on the helmet.

Generally the simpler the design the better. Solid colors look good. Lighter helmets and colored pants, (not neceassily a dark color) so that the jeries and pants don't look the same on the road is good.
S

What ever uniform Minka Kelley is wearing I'm all for. 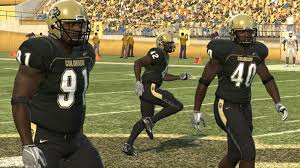 Always had a soft spot for the all black Buffalos'.
T

I did like Army's camo uniforms from a couple years ago. those were cool.
A

Marylands were the worst I have seen in quite some time they even beat out Oregons which are hideous.

I wish we would wear the Orange jerseys from your SI cover with piping around the numbers. One of the biggest irks I have with our uniforms is that we wear way too much blue. As Kaiser would say ions ago Illinois is the Orange and we are the Fightin' Illini we need an Orange jersey that isn't disgusting like the GRob Washington and Illinois games from 2007. We are the only team in the NCAA with 1 official color Orange and we need more Orange in our jerseys. I will say though I love the away jerseys from the McNabb years I was watching SU@WVU from 1998 on youtube and absolutely loved those Cuse away jerseys.

Biased obviously, but I love ND's uniforms...good colors and simple. Putting on some retro for next weekend.

http://www.youtube.com/watch?v=vvkDuCphfvY&feature=related
Here is a youtube link to that game we lost to WVU but it was an excellent football game with Ron Franklin and Mike Gottfried on the call.
You must log in or register to reply here.