dasher said:
We have Orange79 for this
Expand...

I just always wanted to do it once

This kid looks really good... This thread not so much. Looks like this gentlemen could play DE as well if he wanted and have to love that athleticism and versatility. Imagine lining him up at the h back Elmore spot for both blocking and red zone targets?

Pretty simple, Dino and Co have had a lot less non qualifiers than his predecessors. Think it's safe to say he values complete individuals who get after it in the classroom as much as the weight room or on the field. Not much of a stretch for a coaching staff that asks janitorial staff and lunch room workers about how recruits act in high school is it? Couple that with covid recruiting cycle and I think you HAVE to land guys that you know will make it to campus much less thrive on campus.

To the name puns... What is the point? What positive comes from it other than hoping for likes like anything else in social media era? It realistically could irk the player and their family AND also waters down threads for those actually interested in actual recruiting thoughts on the players.

Why not DM each other with internet p*ssing matches and 3rd grade level humor? See if anyone continues typing without a like button attached. Might spark good convo or might find it a futile endeavor.

Bulldog04 said:
I just always wanted to do it once
Expand...

As long as the operant term is once.

Let's all get back to talking about Devean Deal. Thanks.

OMG is that article a name pun?!

reedny said:
OMG is that article a name pun?!

I was told here that recruits hate that.

reedny said:
OMG is that article a name pun?!

Was referring to the Real Deals, which is a pun. But thank you for the lecture.
Last edited: Jul 1, 2020
S

Was referring to the title (the Real Deals), which is a pun. But thank you for the lecture.
Expand...

You’re wrong though. That isn’t the title of the article. Just what the poster wrote for the hyperlink

SURU said:
You’re wrong though. That isn’t the title of the article. Just what the poster wrote for the hyperlink
Expand...

The article isn't viewable from the link ... so my post was a question -- you missed that. No one's trying to insult anyone - relax.
S

reedny said:
I can't see the article ... so I my post was a question -- you missed that. No one's trying to insult anyone - relax.
Expand...

Lol sorry. As someone with an easily punnible last name, this particular subject gets me all hot and bothered

SURU said:
Lol sorry. As someone with an easily punnible last name, this particular subject gets me all hot and bothered
Expand...

Too.bad your link doesn't work; it's from the Elpaso Times, hope that helps.

reedny said:
The article isn't viewable from the link ... so my post was a question -- you missed that. No one's trying to insult anyone - relax.
Expand... 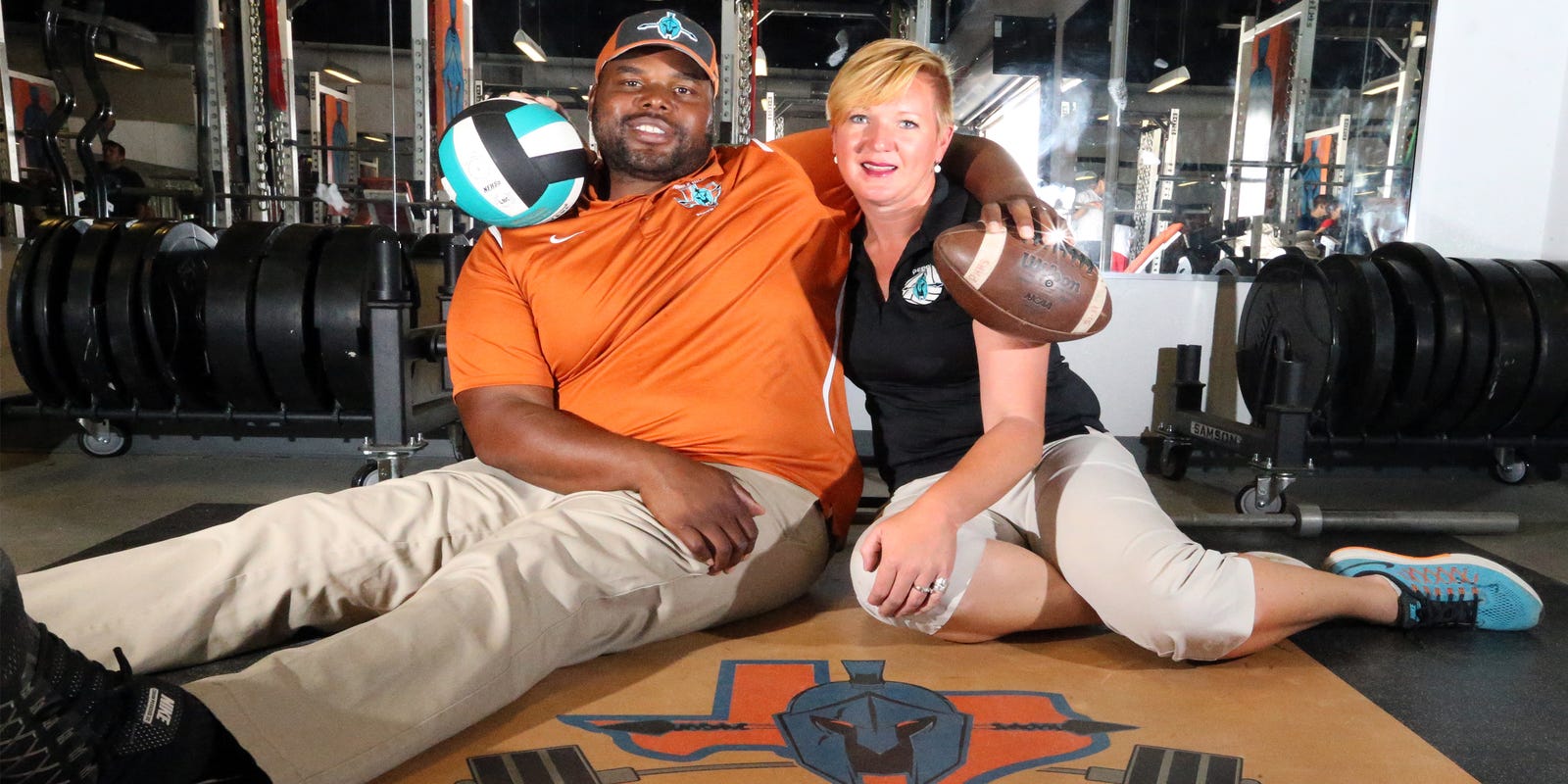 The Deals are on a mission to mold players into resilient individuals prepared to overcome the challenges that await.

Athletics is the lifeblood of Team Deal.

The captains on the squad are Mike and Nicki Deal, spouses and coaches at Pebble Hills High School.

“Sports is why we met each other,” Nicki Deal said. “We know how to be part of a team, we handle things like we’re part of a team and we play the role of teammates when we do anything. We divide and conquer all the tasks that Team Deal needs to get done.”

The Deals are on a mission to mold players into resilient individuals prepared to overcome the numerous challenges that await.

“Character matters. We make sure we make good people,” Nicki Deal said. “To see their joy, it’s why you do it. For some of these kids, you are their parent.”

Mike Deal, 39, is an Eastwood graduate and played football at the University of Texas at El Paso. Nicki Deal, 36, a native of Rockford, Ill., was a dual athlete at UTEP: She was a hitter on the volleyball team and a center on the women’s basketball team.

"We had the same group of friends. Athletes hung out around each other," Nicki Deal said.

In her senior year at UTEP, Nicki Deal played in 85 sets and finished the season with 222 kills, 44 blocks and 30 digs. In basketball, which was coach Keitha Adams' debut season, Nicki Deal played in 12 games and averaged 13 minutes of playing time per game. She averaged 3.4 rebounds and 2.4 points a game. In her junior year in volleyball, she finished the season with 278 kills, 64 blocks, 45 digs, 30 assists and three service aces. In basketball, she averaged 4.1 points and 2.2 rebounds a game; she had a career high 12 points against Hawaii.


Currently, at Pebble Hills, Nicki Deal is the head varsity volleyball coach and Mike Deal is an assistant coach on the football team and the shot and discus coach for the Spartan track and field team. Before Pebble Hills, both coaches were at El Dorado

However, of all the lessons learned in sports, work ethic might be one of the most important qualities.

“Getting a job, it’s not just because they see potential, but can you meet that potential,” Nicki Deal said. “Sports teaches us that no matter how far behind you start, you can finish ahead if you outwork the competition.”

Mike Deal added, “You learn something from everyone you meet in life — good and bad coaches. You get all your life experiences in one locker room.”


They recognize that children are like sponges and often mirror the behavior of those closest to them.

“Arguing a call is showing kids there’s an excuse: ‘It’s the ref’s fault,’ ” Nicki Deal said. “I learned to tone it down and be like some of the great coaches.”

Nicki Deal is aware of the influence she holds as a leader. She's played that role for a while now. In 2001, she was selected as one of 300 student-athletes to participate in the annual NCAA Foundation Leadership Conference. There were 1,089 nominations. To be considered, she had to be in good academic standing and demonstrate an ability and strong desire to be a leader.

"True character is doing the right thing when no one is watching," Nicki Deal said.

Competition doesn’t only occur on the court or field, Mike Deal pointed out.


Mike and Nicki Deal, who were married in 2004, have used all of the traits they’ve learned in sports to flourish as a family. They have four children: Devean Deal, 13; Markis Deal, 11; and 7-year-old twins, Zoey and Braylon Deal.

At 10 days old, Devean Deal was at his first UTEP football game.

“Sports is ingrained in everything the kids do. They understand you have to get the grades to play,” Mike Deal said.

They all play basketball and track, the boys play football, and they all excel at it.

Devean Deal recently won the pentathlon event at the Border Championships. At the age of 6, Markis Devean held three USA Track & Field area records: the 400 meters, 200 meters and 100 meters. Markis also holds the regional record for the shot put in the 9- and 10-year-old category. He also is a national champion in the shot put. The region represents Colorado, West Texas, New Mexico and Arizona.


Zoey holds an area record in the 400 in the 6 and younger category and in the shot put in the 7- and 8-year-old category.

Every night, the Deals are at a game or at two or three practices.

“We have extended family who have helped us be successful,” Mike Deal said, adding that Montwood head football coach Ariel Famaligi and Del Valle track and field coach Orlando Hairston have helped.

The Deals embrace their players as family as well.

Every year, Nicki Deal hosts a volleyball Christmas party at her house.

“The kids know they can count on us. We have to take time out of practice for our Spartan kids,” Nicki Deal said.

This season, each coach is embarking on a journey to lead their players through a tough season as Pebble Hills enters its first varsity season with no seniors.

“We all get to grow, build, start a foundation and create a tradition,” Mike Deal said.

But it’ll also be a crash course on life.

“You learn life in four years, how to handle ups and downs,” Nicki Deal said. “Tough road ahead, but hopefully we’ve made tough players — tough enough to get them ready for what’s coming at them. We've got to rise to the occasion.”