Change Ad Consent Do not sell my data Why Syracuse will win | Syracusefan.com
Menu
Log in
Register
Install the app
You are using an out of date browser. It may not display this or other websites correctly.
You should upgrade or use an alternative browser.

Why Syracuse will win

- Georgetown is 7-1 against Maryland-Eastern Shore, Central Connecticut, a 2-7 Illinois team, Loyola Marymount, (who beat them by 13), South Florida, Campbell, Richmond and Liberty. They haven’t played anyone remotely as good as Syracuse or the teams that beat us, (Connecticut and Oregon) or our best win (at Ohio State). We’d be 8-0 against their schedule and it wouldn’t be close.

- Georgetown is averaging 15 turnovers a game. From Nunes’ interview with a Georgetown blogger: “The Hoyas… don’t seem to react well to defensive switches during games and are turnover prone. I’m less concerned about the former ..since you bleed 2-3 for 40 minutes, but the turnovers, oh the turnovers….(Jamorko) Pickett’s vanishing act has been one of the bigger headscratchers for Hoyas fans thus far since he showed so much promise last season, and he’s gone from a guy we were expecting to put up 15+ per game to a guy we’re now hoping can contribute something without dribbling the ball off of his knee out of bounds or passing to a guy wearing the other uniform…It starts with Akinjo, who is going to have to be able to hold on to the ball and make precision passes to the top of the zone over or around his defender. This worries me a bit because Akinjo is fairly miniscule.”

- McClung is listed at 6-2 and Akinjo at 6-0. Both are freshmen. They will be going up against 6-4 senior Frank Howard and 6-6 junior Tyus Battle. And our guys won’t have to try to keep up with smaller players in a man-for-man. Not only will they be a formidable defensive wall in front of the youthful Georgetown backcourt but they will be able to fire at will over the shorter guys guarding them. They can aloo back them down and post them up in the paint. Remember Billy Edelin against Chris Thomas of Notre Dame?

- Oshae Brissett will continue to be a tough match-up problem for anybody. Look for another 20/10 type of game.

- Elijah Hughes will also be tough to match-up with due to his shooting ability and the way he runs the court. We’ll get another 15 points from him.

- Maybe Marek could hit a couple of shots early and get his mind into the offensive game.

- Maybe facing Govan will put some fire in Chukwu’s belly and he could play like he was 4 inches taller, which he is.

- Maybe Buddy Boeheim will get a shot and hit a few of them.

- Those freshmen have never played in the Dome before or shot at a basket so isolated in space before. 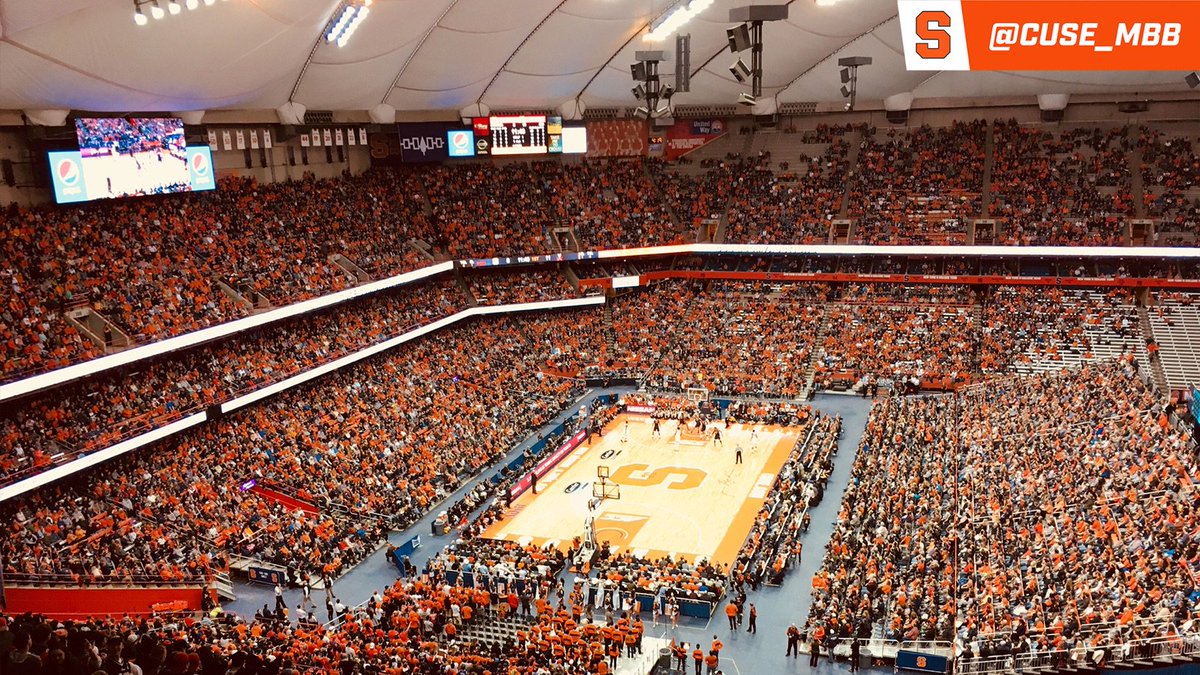 LOVE the picture of the Dome!
You must log in or register to reply here.

Why Clemson will win