Change Ad Consent Do not sell my data WVU-Marshall | Syracusefan.com
Menu
Log in
Register
Install the app
You are using an out of date browser. It may not display this or other websites correctly.
You should upgrade or use an alternative browser.

Marshall just took a punt to the house. 7-0 Herd.

They are fired up

Marshall's D is really flying around. 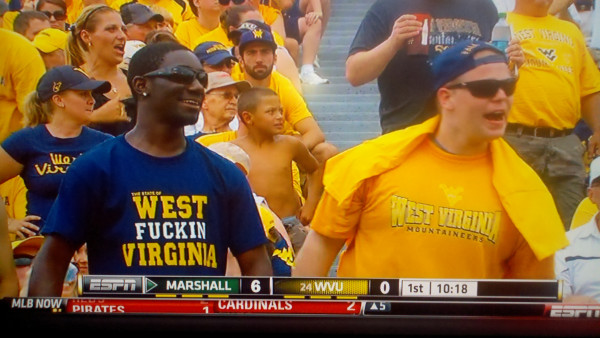 Well done I thought I saw that!

I thought that is what it said.

I was wondering why they guy on the right was barking, Marshall had just had that great punt return.

They actually meant to have that shirt say West Freaking Virginia, but they ain't learned letters so well down there yet. Ga-huk.

Actually I might have to retract some of my prior statement ... that OLine for WVU might end up being a problem for them all year if they can't even handle the Marshall pass rush ... good grief ... is it me or did I just see that linesman literally mark that pass initially and then jump an extra yard to his right? Bizarre ... only in West Virginia.

They should combine that shirt with the "West Virgina" shirt from their NIT championship a few years ago, then they'd actually have something great.

wfschrec said:
Actually I might have to retract some of my prior statement ... that OLine for WVU might end up being a problem for them all year if they can't even handle the Marshall pass rush ... good grief ... is it me or did I just see that linesman literally mark that pass initially and then jump an extra yard to his right? Bizarre ... only in West Virginia.
Expand...

Not only in West Virginia. I see refs do that frequently. Officials spotting the ball gets worse every year.

During the opening game of the 2011 WVU football season, one of the ESPN cameras showed a young man wearing a blue t-shirt with "West F##### Virginia" on the chest. Based on the TV rating of the game, this picture was seen by at least a few million people around the country. I think you would agree with me that this is not the image of our University and our state that we want to promote.

I would like to ask you to help me convince people who are wearing these t-shirts to reconsider their choice of attire. I recognize that the First Amendment protects free speech, and as a lawyer, I am more than familiar with the decision of the United States Supreme Court in the landmark 1971 case, Cohen vs. California, which is the law of the land regarding public institutions (like WVU) and protected speech. But as my dad used to tell me, ‘just because it is legal does not mean it is right.’ And I certainly believe that people wearing these offending t-shirts at Mountaineer games, or anywhere else, for that matter, are damaging the reputation of our state and its flagship institution of higher learning.

I would like to request that if you see someone wearing one of these t-shirts that you politely ask him or her to change or to cover it up. Even wearing it inside-out would be an improvement. As you know, we have a big home football game against LSU coming up next Saturday and we would like to present a more favorable image to the millions of football fans from around the country who will be watching the game. Be polite, be courteous, be friendly-but do speak up.

Thank you for your support of the Mountaineers!