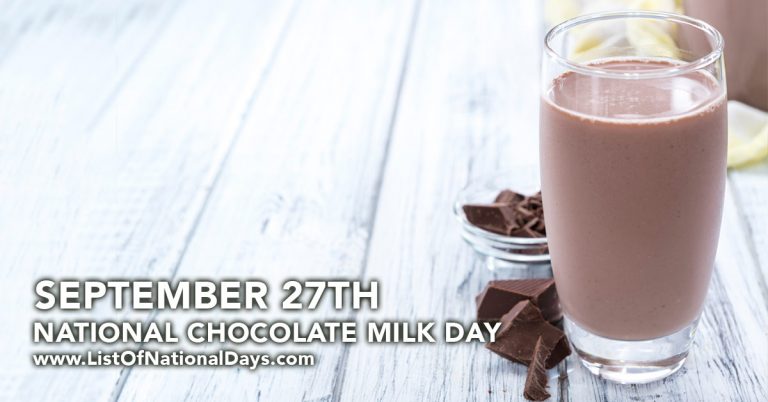 National Chocolate Milk Day celebrates the chocolate sweetened milk, which can either be bought in stores, or made at home by mixing milk with either cocoa powder and a sweetener, chocolate syrup, melted chocolate, or a powdered chocolate mix. Since at least 1494, Jamaicans had been drinking a hot beverage made with cocao or cocoa—sources are not conclusive as to which one it was—which was either boiled with milk and cinnamon, or mixed with water (again, sources give different accounts of the drink). According the Natural History Museum in Britain, Sir Hans Sloane, and Irish botanist living in England, invented chocolate milk after visiting Jamaica in the 1680's and being given their drink. He didn't particular like it—he thought it was "nauseous"—and decided to add some some milk (the implication being this was cold milk and not boiled milk). He took his recipe back to England, and thus became known as the originator of chocolate milk, although some allege—without specific evidence—that Jamaicans or others may have mixed it with milk first.

Sloane's recipe was being sold as a medicinal elixir in the 1750's, and in the following century the Cadbury Brothers sold drinking chocolate that was influenced by Sloane's recipe. In 1828 the Van Houten company in Amsterdam invented a cocoa pressing method which made a chocolate powder that could be more easily dissolved in water or milk, which improved the consistency of chocolate milk.

It was a big weekend in recruiting for the Syracuse basketball team as they hosted two of their priority targets on official visits.

Among the other schools he’s officially visited include Washington and Rutgers. Other offers include Maryland, Oklahoma, Iowa State and Seton Hall.

He was joined on campus by another 2022 prospect, Sunderland (Mass.) Northfield Mount Hermon center Peter Carey, first reported by Sports Illustrated’s Mike McAllister. Carey was offered by Syracuse in July shortly after Syracuse’s Elite Camp, and also holds a high-major offer from Rutgers.

Other mid-majors to have offered Carey include Iona, Umass and Albany. He is currently not rated or ranked by 247 Sports.

Over in the football world, Syracuse handed out two offers in the past week to a pair of 2023 prospects.

Five-star power forward Derik Queen from Baltimore, one of the best players across the country in the 2024 class, detailed in a recent interview that he has interest from Syracuse basketball.

I hadn’t previously seen a lot of mentions regarding the Orange coaching staff being involved with the 6-foot-8 Queen, so I was glad to see the ‘Cuse noted in his recent interview with Pro Insight.

Queen, who runs on the AAU circuit with the Baltimore-based Team Thrill, suited up in his freshman season for the Saint Frances Academy in Baltimore.

He put up some really impressive numbers as a freshman and won all kinds of national accolades. Queen, though, will compete as a sophomore for the powerhouse Montverde Academy in Montverde, Fla.

The Montverde Academy is considered by the bevy of national experts as the top prep-school program around the country, and it should be ranked No. 1 overall in pre-season polls ahead of the 2021-22 stanza.


Syracuse basketball has interest in an elite forward from Baltimore.​

In his Q&A with Pro Insight, Queen said that he has offers from Auburn, DePaul, Maryland, Texas, Virginia Tech, Georgetown, LSU and Arizona State, as well as interest from the Orange, Florida State and Pittsburgh.

Additionally, a recent tweet from Alec Lasley, the managing editor of TheHoosier.com, says that Indiana has offered a scholarship to Queen.

Indiana extended an offer to one of the top 2024 prospects in the country last night. Meet Derik Queen — learn about his game and watch highlights of his summer. #iubb
Details: New 2024 offer - Derik Queen pic.twitter.com/JNt0XvaBR3
— Alec Lasley (@allasley) September 15, 2021
Expand...

Up until recently, Queen was the No. 1 high-school prospect nationwide, according to ESPN. When this recruiting service recently refreshed its national ratings of the top-25 players in the 2024 cycle, Queen fell, but not far, to No. 2 overall.
... Syracuse Orange guard Buddy Boeheim (35) scores on a jump shot against Houston during the Sweet Sixteen round of the 2021 NCAA Tournament on Saturday, March 27, 2021, at Hinkle Fieldhouse in Indianapolis, Ind. Mandatory Credit: Albert

What should we make of Syracuse?

Jim Boeheim is a Hall of Fame coach, has been since 2005. He’s been at Syracuse, with the exception of just a few years after he graduated, since 1962.

That’s really extraordinary. How many people have been at the same place for 59 years? We think we can give him the three years he spent playing professionally with the Scranton Miners of the old ECBL. Clearly his heart has always been with Syracuse.

He’s racked up 982 wins, second only to Duke’s Mike Krzyzewski, and if you added the 101 that the NCAA took away, he’d be just the second D-1 coach to top 1000, something he might do by the end of this season anyway.

And while the ACC is a different animal than was the old Big East in many respects, Boeheim was highly competitive in that very tough league and has been much less so in this one.

Part of it is what we talked about recently, that most coaches careers tend to tail off near the end.

Boeheim is not what he used to be, but he’s still a tough out. The ACC has mostly learned how to deal with his famed 2-3 zone (which also isn’t as tough as it used to be) but in the post-season it’s a nightmare for teams that haven’t faced it and it gives Syracuse a puncher’s chance against anyone.

The other part of it is that the talent just isn’t what it used to be.

Consider who departed after last season.

GONE
Alan Griffin’s brother AJ is now a Blue Devil and a possible lottery pick next summer. Alan left early and is a marginal NBA prospect at best. Guerrier is off to Oregon but is he a sure fire NBA prospect? No. Dolezaj is 6-10. He’s a nifty player but he never topped 210 lbs. and is most famous for having the guts to try to draw a charge on Zion Williamson. Gutty but frail, he’ll play in Europe. And Richmond left for Seton Hall but he, too, is no sure NBA prospect. How many transfers are?

There’s not a Derrick Coleman, Billy Owens or Pearl Washington in the bunch - but those are major losses, and that underscores Syracuse’s decline.

What’s he got to work with?

BACK
Jim’s son, Buddy, has turned into a major star. He went nuts in the postseason last spring, lighting up NC State for 27 in the ACC Tournament, then putting up 31 on Virginia, then 30 against San Diego State and 25 against West Virginia before Houston finally harassed him into a 3-13 outing for just 12 points. He’s a superb offensive talent but not hugely athletic.

Girard? He’s been erratic. He shot just 35.5 percent overall and 33.3 percent from behind the line. And while 78 percent isn’t bad for free throws for most players, Girard shot nearly 90 percent from the stripe as a freshman.

This is a guy who shattered Lance Stephenson’s New York state scoring record of 2,946 points by an astounding 1,817 points for a total of 4,763 points. That’s nearly beyond imagining.
...

Dunk & Bright has operated a furniture store on Syracuse’s South Side since the retailer was founded 94 years ago. It soon will open its second store, this one in one of the city’s suburbs.

The furniture retailer plans to open a store in the former Macy’s space at Great Northern Mall in the spring of 2022, owner Joe Bright said Friday.

“This is a perfect fit,” Bright said. “We like the location and the retail corridor.”

Macy’s closed its store at the struggling mall on Route 31 in 2017 as part of a plan to shutter 100 of its 730 stores nationwide. The store has been vacant since then, except for a pop-up Halloween store that occupies a small portion of the nearly 88,000-square-foot space seasonally.

Dunk & Bright has been at the same location on South Salina Street since the business was founded by Joe Bright’s great-grandfather, William Bright Sr., and William Dunk Sr. in 1927.

The two men met on the floor of Brown, Curtis & Brown furniture store in downtown Syracuse. Bright was a salesman at the store when Dunk, a production manager at the Franklin Automobile Co., came by with his wife to shop for furniture.

Impressed with Bright’s salesmanship, Dunk suggested he go into business for himself and put up the money for the two to start a furniture store. Bright later paid Dunk $5,000 for his share of the business. Bright died in 1939, but the business has remained in the Bright family.

The store has expanded several times over the years, the latest a 25,000-square-foot addition in 2006. Dunk & Bright’s showroom is now the largest furniture showroom in New York, according to the store’s website.
...
You must log in or register to reply here.