Carl Sagan Day celebrates the life, teachings, and legacy of Carl Sagan, who was born on this day in 1934, and who is known for his many contributions to science. The day was created in 2009 by the Center For Inquiry in Fort Lauderdale, as well Florida Atheists and Secular Humanists (FLASH), and other groups. Events have been held in Florida, but also have spread around the world. Some examples of events that have taken place are star parties—where people come together and view the sky, astronomy lectures, science fairs, and workshops. 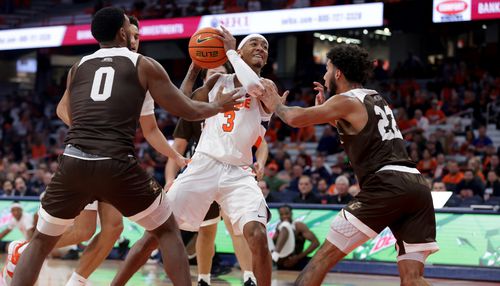 Judah Mintz experienced some opening-night jitters in full view of the 17,000-plus fans at the JMA Wireless Dome.

Less than 2 minutes into Syracuse’s season opener against Lehigh, the freshman point guard found himself ahead of the field and headed for a breakaway layup.

But Mintz blew the gimme.

“It felt great,’’ Mintz said later of his first game in a Syracuse uniform. He then added with a sheepish grin, “I was a little nervous, as you could see by my first layup.’’

Mintz recovered after that early miscue to put together a stat line that exceeded his performances in both of Syracuse’s two exhibition games.

Mintz scored 16 points in the Orange’s 90-72 win over Lehigh, while also dishing out three assists plus a steal.

“I thought Judah was really good,’’ Syracuse coach Jim Boeheim said. “At the end of the first half and the second half, he played really well and under control. He got in the lane (and) made some plays.’’

Getting in the lane appears to be a key for Mintz’s success.

Syracuse coaches and players have spent the preseason raving about his ability to get past his defender, penetrate and score in the paint.

Mintz had drifted away from his strength at times in the Orange’s exhibition games.

Against Indiana (Pa.), he had scored 14 points on 6-for-13 field-goal shooting. He did make two of his three attempts from 3-point range, but he didn’t get to the free-throw line once.

In the next exhibition against Southern New Hampshire, Mintz’s scoring dipped to four points on 2-for-10 shooting. He missed all three of his 3-pointers. He only took one free throw and missed that, too.

But in the first regular-season game, Mintz was on point at the point.

He got his 16 points on 6-for-9 shooting. All of his shots came in the paint. As he attacked the basket, he drew fouls on Lehigh defenders and wound up going to the foul line four times. He made all four free throws.
...

The Syracuse Orange are 1-0 after a 90-72 opening night victory over Lehigh. After the game, Head Coach Jim Boeheim and several of his players shared their thoughts on the win: 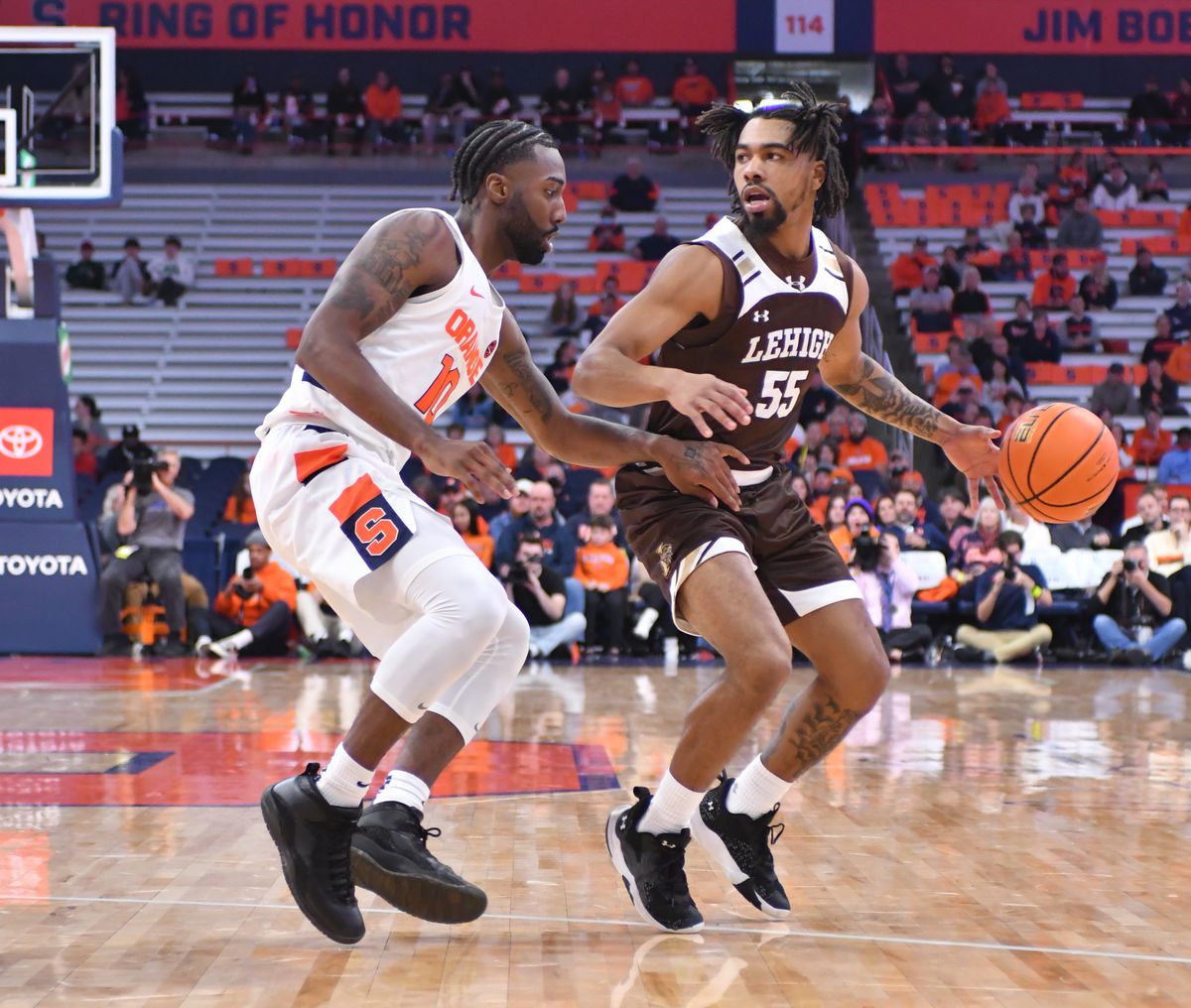 On the opening day of the 2022-23 college basketball season, Syracuse was one of the teams that found itself on the winning side. The Orange opened the season 90-72 convincingly over the Lehigh Mountain Hawks.

The winningest active coach in Division I basketball, Head Coach Jim Boeheim, got his 1,100th career win to begin his 47th year at the helm.

But Boeheim did not care.

“This was our first win,” Boeheim said. “Now we are 1-0 and that’s the only thing I’m concerned about. Nothing else matters.”

The win was made possible thanks to a 10-0 run by the Orange with just under nine minutes left in the first half.

Lehigh’s Dominic Parolin scored the night’s first two points, and the Mountain Hawks led by as high as five points in the beginning of the game, but the Orange began to pull away and Lehigh could not get back in it. The Orange would lead by as many as 18 points heading into the half.

Both teams went on to score 46 points in the second half.

Seniors Joe Girard III and Jesse Edwards are the lone returning starters from last season. Girard led the team with 19 points and Edwards had a double-double with 18 points and 11 rebounds. Senior Symir Torrence had a career-high 10 points.

Freshman Judah Mintz started and opened his college campaign with 16 points on the night.
...

The terms used to describe Jake Crouthamel come straight out of an old black-and-white movie where tough guys said what they meant and backed up their words with deeds.

Crouthamel, Syracuse University’s athletic director from 1978 to 2005, was all those things.

He never spoke five words if four would do. He cared little for public opinion even if it meant wrongly being blamed for keeping an arch-rival out of the Big East.

Throughout a transcendent era leading SU’s sports programs, Crouthamel liked to work in the background, neither seeking publicity for his accomplishments nor caring about criticism.

The school’s longest-serving athletics director, Crouthamel oversaw the building of the Carrier Dome, hired successful football coaches Dick MacPherson and Paul Pasqualoni and played a key role in the formation of the Big East Conference.

“I don’t think people realize what a pivotal figure he has been in Syracuse athletic history,’’ Syracuse basketball coach Jim Boeheim said.

Crouthamel died on Monday at the age of 84.

With the passing of 17 years since his retirement and his aversion to seeking the spotlight, Crouthamel’s impact on Syracuse athletics and the entire college sports landscape are easily overlooked.

But those who knew Crouthamel credit him with playing a large role in some major developments over the years.

When Dave Gavitt, then the athletic director at Providence College, began pushing the idea of a conference of Eastern independents, one of the first people he talked to was Crouthamel.
...

Jim Boeheim Has 1100 Wins And Syracuse Basketball Is 1-0 (youtube; podcast; Locked on Syracuse)

Owen Valentine breaks down Syracuse Basketball's season opener against Lehigh. The Orange open up the year with a 90-72 victory and looked solid on many fronts. Who were the names that shined? Who needs to step it up? Jim Boeheim plays man to man? All that and more on your Tuesday Episode of Locked On Syracuse.

Syracuse basketball coaches remain without a commitment in the 2023 recruiting cycle after four-star guard Mike Williams picked LSU over the Orange and several other finalists.

Immediately prior to his commitment announcement, the 6-foot-4 Williams was receiving a decent amount of analyst buzz in the direction of the Tigers, so it wasn’t a huge surprise when this top-100 prospect chose LSU.

Williams had taken an official visit to the Hill. With him off the board, I’m not aware of any other 2023 guards whom the ‘Cuse is actively pursuing, but that could change.

What’s more, the only 2023 target whom it seems that the Orange is significantly in play for at this juncture is big man William Patterson.

The 7-foot Patterson has Syracuse basketball in his final three, and he may look to take an official visit to the ‘Cuse at some point in the future.

The 2023 cycle has proven a struggle for Syracuse basketball.

As we’ve noted in previous articles on this topic, the Orange has doled out scholarships to more than 20 high-school players in the senior class.

Now, a couple of things to address here. First of all, given that the ‘Cuse 2022 class had six members, and the team also brought in a young big-man transfer this past off-season, it was always likely to be the case that Syracuse basketball wouldn’t end up with a large 2023 cycle.
... 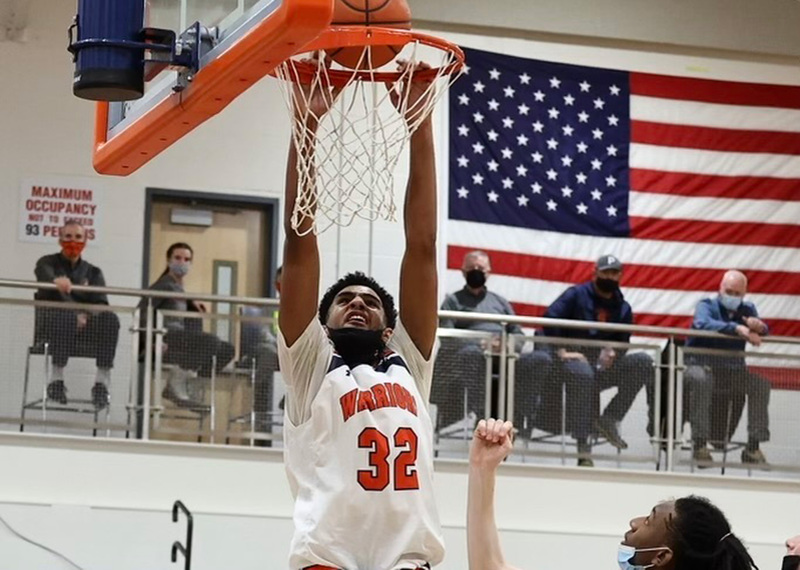 "We have unfinished business." Andreo Ash enters his junior season at Liverpool High School determined to help his team win it all.

Andreo Ash's discipline, aggressiveness has him poised for big junior season (DO; Lu)

But Andreo Ash stole the ball from Tully and was fouled instantly. Unlike Cain, Ash drained both free throws to give Liverpool a 53-50 lead, securing the Section III title.

“For a big man to have good touch, get fouled, and go to the free throw line as a sophomore with all eyes (on Ash) and knock the free throws down, that is just the testament to his hard work and toughness, ” Liverpool head coach Ryan Blackwell said.

After the sectional title, Liverpool advanced to the regional finals of the New York State Tournament, falling to Green Tech, the No. 1 team in Section II. But throughout Liverpool’s second place finish in regular season play, Ash dominated against central New York’s best, averaging 16.4 points per game.

His father, Kevin Ash, coached him when he was a kid, and put him in the Liverpool Optimist Basketball league. To nurture Ash’s mentality about basketball, Kevin showed Ash highlights and documentaries of NBA Hall of Fame players on YouTube and encouraged him to read biographies about them.

“He actually gets fouls a lot and he doesn’t complain about it,” Kevin said. “I really respect that because it’s very hard to play when you’re not getting a lot of calls. He handles it very well.”
... 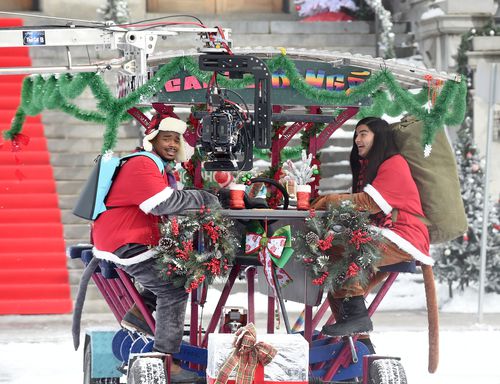 “It’s a Wonderful Binge” is a holiday-themed sequel to 2020′s “The Binge,” a sort-of spoof of “The Purge” set in the near future where drugs and alcohol are banned except for one day a year.
...