Change Ad Consent Do not sell my data Orangeyes Daily Articles for Wednesday - for Football | Syracusefan.com
Menu
Log in
Register
Install the app
You are using an out of date browser. It may not display this or other websites correctly.
You should upgrade or use an alternative browser. 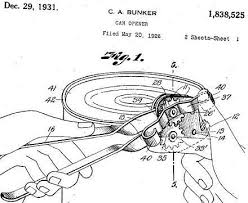 Welcome to Can Opener Day!

Does it seem odd that there is a day dedicated to the can opener? Well, did you know that there was about a half century between the invention of canned food and the invention of the can opener? Maybe after all those years of people struggling to open cans without one, they thought the can opener needed some recognition. There was some canning of goods in the Netherlands before 1800, but it was not until 1810 when the preservation of food in cans was patented. By the 1820's, food was being canned in Britain, France, and the United States. But, the first can opener was not patented until 1855 in Britain, and 1858 in the United States. Prior to this, phrases such as "Cut round the top near the outer edge with a chisel and hammer" were written on cans. The early can openers were primitive, however, and the first rotating wheel opener was not patented until 1870. This too was problematic, as the can had to be pierced before the opener could be used. In 1925, a second serrated wheel was added by the Star Can Opener Company, which greatly improved the functionality of the opener. This opener was improved in 1931 so that it had pliers-like handles and could hold a can on its own. This two wheeled opener that held the can is the main style that is still in use today. The first electric can openers were patented in the 1930's, but it wasn't until 1956 when a free standing electric opener by Udico became successful.

Syracuse Basketball: Which new ‘Cuse players will get the most minutes? )itlh; Adler)

Heading into the 2022-23 season, Syracuse basketball will boast a roster that has numerous senior veterans, as well as a six-member recruiting class and a big-man transfer from the Atlantic 10 Conference.

Based on a variety of reports, it looks like there’s a good chance that 2022 four-star prospect Judah Mintz could end up as the team’s starting point guard to begin the upcoming campaign.

A stanza ago, the 6-foot-3 Mintz was a stand-out senior for the powerhouse Oak Hill Academy in Mouth of Wilson, Va., which ended up as a top-10 squad in 2021-22 national rankings.

I think it’s relatively safe to say that Mintz could be in line for the most minutes among all of the Orange newbies, at least at the onset of the 2022-23 term.


Let’s discuss which Syracuse basketball incoming players may receive the most run.​

So there are seven guys new to the ‘Cuse program in 2022-23. Mintz, as we just noted, will likely earn the most minutes among all of the new players.

The 6-foot-6 Taylor, who as a senior suited up for the post-grad team at the IMG Academy in Bradenton, Fla., likely can play at both shooting guard and small forward. I think that versatility gets him a good amount of court time.

Next up, I’ll go with 2022 four-star small forward Chris Bunch. I believe that the 6-foot-7 Bunch, out of the Wasatch Academy in Mount Pleasant, Utah, along with Taylor and 6-foot-8 sophomore Benny Williams will form a strong, but young, trio at the forward spot for Syracuse basketball.
...

Syracuse basketball 2023 priority recruiting target Joseph Estrella is receiving a bunch of analyst predictions in the direction of another suitor.

While I always say to take these sorts of projections with a grain of salt, because they’re not always correct, it is a little concerning for the Orange that at least a half-dozen experts, as of Tuesday, are forecasting Estrella’s collegiate destination to be Southeastern Conference member Tennessee.

Of course, this analyst buzz doesn’t guarantee that the talented 6-foot-11 power forward/center will pick the Volunteers in early September.

Let’s not forget that numerous experts were projecting 2022 four-star guard Judah Mintz to DePaul, and he ended up choosing the ‘Cuse at the end of March.

Joseph Estrella, a rising senior at the Brewster Academy in Wolfeboro, N.H., has said that he plans to reveal his commitment announcement on September 2 at the XL Sports World in Saco, Maine. 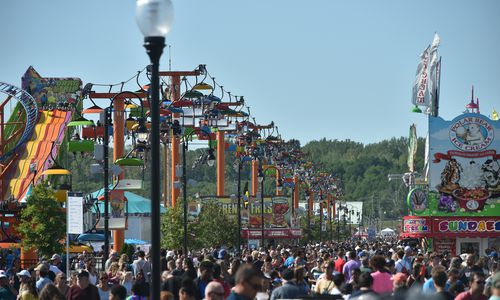 The headliner for this weekend, of course, is The Great New York State Fair. There will be tons to entertain at the fairgrounds, as usual, like carnival rides, music, fireworks, racing pigs and more food than any one person could possibly handle (so bring your friends). In addition to the fair’s many concerts, there are a few more around CNY this weekend, like Brad Paisley at The Amp, Daughtry in Verona and Nashville songwriters at Saranac Brewery. There will also be two movie screenings outdoors, Shakespeare’s “The Tempest,” a crafts fair in Armory Square and yoga in an apple orchard.

Another year of The Great New York State Fair has finally arrived. As usual, there will be lots and lots of food — caramel apple sundaes, Bavarian roasted nuts, sirloin tips, alligator meat and BBQ only scratches the surface — and lots and lots of music. There will be the perennial carnival games and rides, best-in-show competitions, circus acts, fireworks, racing pigs and more. Go to nysfair.ny.gov for the full line-up, and follow Syracuse.com coverage for highlights from this year’s fair. Tickets are $3 and parking is $5 through etix.com. The fair runs from Aug. 24 to Sept. 5.

Clint Daniels and Tim James, the songwriters behind some of country music’s biggest hits, will play at Saranac Brewery in Utica on Friday for “Taste of Nashville.” James is a Grammy Award winner and the writer behind the Trace Adkins single “All I Ask For Anymore,” the Lee Brice 2010 Billboard song of the year “Love Like Crazy,” and more. Daniels has co-written hit singles for Joe Nichols, Montgomery Gentry, Eric Church and more. The songwriters will play and share stories from their long careers. Head to saranac.com for more information.

Non-profit My Dream Summit will host its annual speaker event at the Oncenter Civic Center this weekend. The gala, geared towards businesspeople and community leaders of color, will include speaker panels and sessions on real estate ownership, navigating funding, diversity, financial education, mental health and much more. Speakers include Emmy Award-winning journalist Jemele Hill, documentarian Soledad O’Brien, pastor Dr. Frederick D. Haynes III, SUNY-ESF president Joanie Mahoney and more. A black-tie gala will follow the summit. After fees, tickets to the summit are $79 and tickets to the gala are $150. Go to mydreamsummit.com for more information.