A national holiday in the Canadian province of Quebec and celebrated by French Canadians worldwide, especially in Canada and the United States, Saint-Jean-Baptiste Day honors the traditional feast day of the Nativity — or birth — of St. John the Baptist. The religious nature of the holiday has been de-emphasized for civic events, and “la St-Jean” is now mainly a celebration of francophone culture and history filled with public events, parades, barbecues, picnics and fireworks. Bonne Saint-Jean-Baptiste!

Tyus Battle, one of the top scorers in Syracuse men’s basketball history, will reportedly start his professional basketball career with the Minnesota Timberwolves.

The Athletic’s Jon Krawczynski reported that Battle will sign an undrafted free agent deal with the club.

According to this story from ESPN’s Bobby Marks, an Exhibit 10 deal means Battle would receive a bonus if he is waived by the Timberwolves, signs with the franchise’s G-League team and spends 60 days with the Iowa Wolves. Exhibit 10 contacts can also be converted by the team into a two-way contract, which allows a player to split his season between the G-League and the NBA.

Cliff notes version on a player signing an Exhibit 10:

* Player could earn up to a $5-50K bonus if he is waived and spends 60 days with G-league affiliate.

* Does not count toward the salary cap.

Carmelo Anthony is approaching his 17th season in the NBA if he does sign with a team for the 2019-20 season. Here’s why the former Syracuse basketball star is one of the most interesting free agents on the market.

He is obviously way past his prime, and will most likely only sign somewhere for the veteran minimum. However, he still believes that he has a lot of game left in the tank, and even though his pit stops in Oklahoma City and Houston didn’t exactly work out, he still averaged well over double-digits in points per game.


At this point, anyone willing to take on Melo will have to put up with his isolation style of play.

The NBA has moved on from this over the past few years, with an emphasis on the three-ball and a lot of spacing, recently popularized by the Golden State Warriors.

Interestingly enough, the Toronto Raptors won the latest installment of the NBA Championship with Kawhi Leonard at the forefront of their success. Leonard, who is known for his defense, is also a tremendous scorer and does so well in isolation and his mid-range game, which gives me reason to believe that Melo’s style of play isn’t really outdated but just needs to flow within the right system.

While there has been speculation that he could return to New York for a Dwyane Wade-esque ‘last dance’, there is really only one team that I see Carmelo signing with and having the most success with.
...

The ever-colorful Syracuse basketball head coach Jim Boeheim made some truly touching remarks when he got honored by the NABC Foundation.

Syracuse basketball boss Jim Boeheim, who has served at the helm of the SU sidelines for the last 43 stanzas, received the 2019 Court of Honor Award from the National Association of Basketball Coaches Foundation at a gala in New York City earlier this week.

At this esteemed event, whose co-chairs included former ‘Cuse stars Carmelo Anthony and Dave Bing, as well as former Orange assistant Mike Hopkins, Boeheim provided a handful of comedic and heartfelt remarks during his acceptance speech, per a report by Chris Carlson of Syracuse.com. Let’s dive into what JB had to say.

Regarding Hopkins, Boeheim opined: “Mike Hopkins is an example of what I think college basketball is all about. He came into Syracuse and I wondered many, many times the first couple years why we recruited Michael. He had to play against Stevie Thompson and Derrick Coleman and Billy Owens in practice every day. He never did make a basket for the first two years. But he persevered and he worked and he scrambled and he hustled. He ended up being the captain of our team, a very successful player. He came back to Syracuse and helped us recruit great players, helped us get to tournaments and win national championships and now he’s going to win them at Washington. He’s an example of what I think it’s all about for me, to see that happen.”
I couldn’t agree more with Boeheim here. While many SU faithful, myself included, felt sad to see Hopkins head for the West Coast, he’s building a tremendously successful program with the Huskies, Hopkins is recruiting at an elite level, and I have every confidence that he will reach a Final Four in the near future.

Buddy Boeheim, one of Jim Boeheim’s sons, is a rising sophomore guard at the ‘Cuse. The elder Boeheim put forth this beautiful statement about Buddy: “I’ve never been more proud to watch my kids play and to have one of them play for me is the biggest thing that’s happened to me in my life.”
...

Duke had a big night in the 2019 NBA Draft with three Top Ten picks and that helped push the ACC to a record night: the nation’s best basketball conference grabbed half the Top Ten spots and six of the first eleven when Phoenix surprisingly took Cam Johnson at #11.

The picks:
Underrated Virginia point guard Ty Jerome went to Phoenix via trade at #24, one pick before UNC’s Nassir Little, who went to Portland at #25. Florida State’s Mfiondu Kabengele closed out first round ACC picks, going to Brooklyn at #27 (we think we heard that he’s headed to the Clippers, but it’s hard to keep track of all the movements on draft night).
...

FIRST ROUND
1. Zion Williamson PF, DUKE
He is the Incredible Hulk of basketball. We have never seen a player quite like Williamson. He is a special talent, but forget that: He is worth the hype, and he will be worth that in many millions of dollars to the New Orleans Pelicans. They lose Anthony Davis and immediately gain a new face of the franchise. The only pick that could have been made here. (Gary Parrish)

3. RJ Barrett SF, DUKE
I'm going to keep this simple: When you make the pick you're supposed to make, the pick that is the best option, I'm going to give it an A. I think Barrett is quite clearly at least the third-best prospect in this draft. And let's not forget: He was the No. 1 prospect for this draft at this time a year ago. (Gary Parrish)

4. De'Andre Hunter SF, UVA
This pick is headed to the Atlanta Hawks, courtesy of the New Orleans Pelicans thanks to trades that aren't official yet. What you expect him to be is a player who can step in and be a threat from 3 and defend on the perimeter. Here is a guy who dominated the national championship game. He's the fourth-best player in this draft, and it's nice to see the NBA catch up to that. (Gary Parrish)...
... 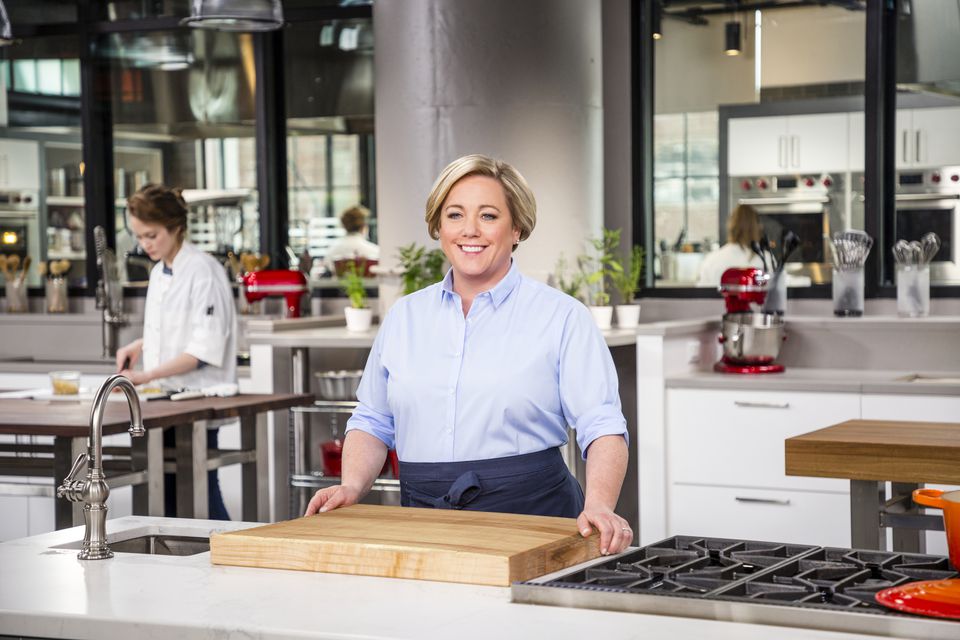 Julia Collin Davison is the co-host of two of the highest-rated instructional cooking shows on television, but the chef and TV star doesn’t forget her Rochester roots.

Collin Davison co-hosts PBS’s “America’s Test Kitchen” and “Cook’s Country" and serves as America’s Test Kitchen’s executive editorial director. She lives in Massachusetts now, but often makes the trip back to the Rochester area to visit her parents, where she’s apt to take in a show at the Eastman Theatre, or shop at the Pittsford Plaza Wegmans—the “mack daddy” Wegmans, she said.

Collin Davison, who grew up in Rochester and graduated from SUNY Albany and the Culinary Institute of America, will be in Syracuse this October as the headliner of WCNY’s fifth annual Taste of Fame dinner fundraiser. Collin Davison, along with Chef Richard Blais, who is emceeing the event, will craft a four-course dinner with Finger Lakes wine pairings.

The fundraising dinner will be held in October.

Collin Davison started with America’s Test Kitchen and Cook’s Illustrated magazine as a test cook in 1999. In 2017, she and co-host Bridget Lancaster took over as hosts of the eponymous television show following the departure of ATK co-founder Christopher Kimball in 2015.

She talked with syracuse.com | The Post-Standard last week on her favorite spots to visit when she’s back in Rochester, her favorite things to cook, life as one of the new faces of America’s Test Kitchen and the greatness of white hot dogs.

Here are excerpts from the interview:

Jacob Pucci: You live in the Boston area now, but you grew up in Rochester and went to school at SUNY Albany. You’re a CIA grad. What impact did growing up in upstate New York have on your life and career?

Julia Collin Davison: Rochester is a family-oriented city and I can appreciate that now that I’m older looking back. I think about moving back all the time because it’s the right mix of everything. The right mix of good music at Eastman [Kodak Hall at Eastman Theatre], good food, restaurants and supermarkets; good public schools and culture, the Geva Theater. It’s just the right mix and it’s easy—easier than living in a big city. I have a daughter who’s 10 and I think about her growing up. I really want to move back, because I feel like it was just it’s a great place to grow up.

JP: When you are back in Rochester, what places—restaurants or otherwise—are your favorites?

JCD: I think mine are going to be pretty dated, but let’s go! I was there this past weekend visiting my folks and we went—you’re going to laugh—to Castaways. It’s right off the lake and it’s the best place to watch a sunset. Period. Hands down. It’s the best place to sit outside. In this place, it’s a good meal at a good price with an amazing view. Just perfection. The one place we go for special occasions is [Ristorante] Lucano. It’s a special occasion place for us. Across the street from that at Wegmans is Amore. My parents love going there. I love going there. They have wine flights and a really great white bean soup in the winter. I love Mamasan’s, India House. Best Indian food ever. For brunch or breakfast, Coal Tower in downtown Pittsford. Dinosaur [Bar-B-Que] of course.
...
You must log in or register to reply here.