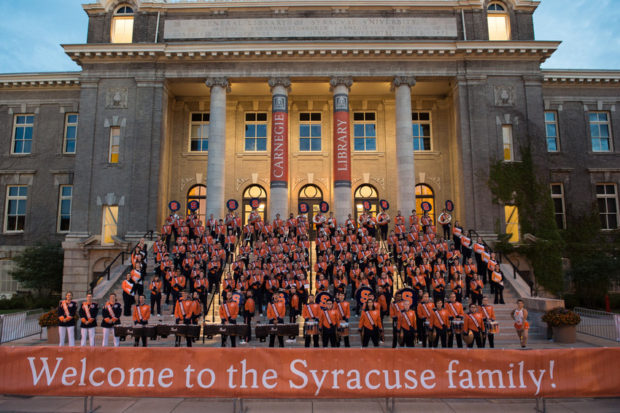 Meant as a day to build awareness around the marching arts, Marching Band Day is all about those upbeat, often cheerful bands which also happen to be moving around while playing.

Taking place on March 4th (march forth – get it?) this day is to celebrate one of the most musical of past-times.

The first marching bands appeared in the 1800s. They originated from groups of traveling musicians who would perform at festivals centuries ago, and as time went on they became the foundation for military bands, from which marching bands directly evolved.

The marching arts has evolved through the years and now includes the indoor marching arts, including WGI Color Guard, Percussion, and Winds. 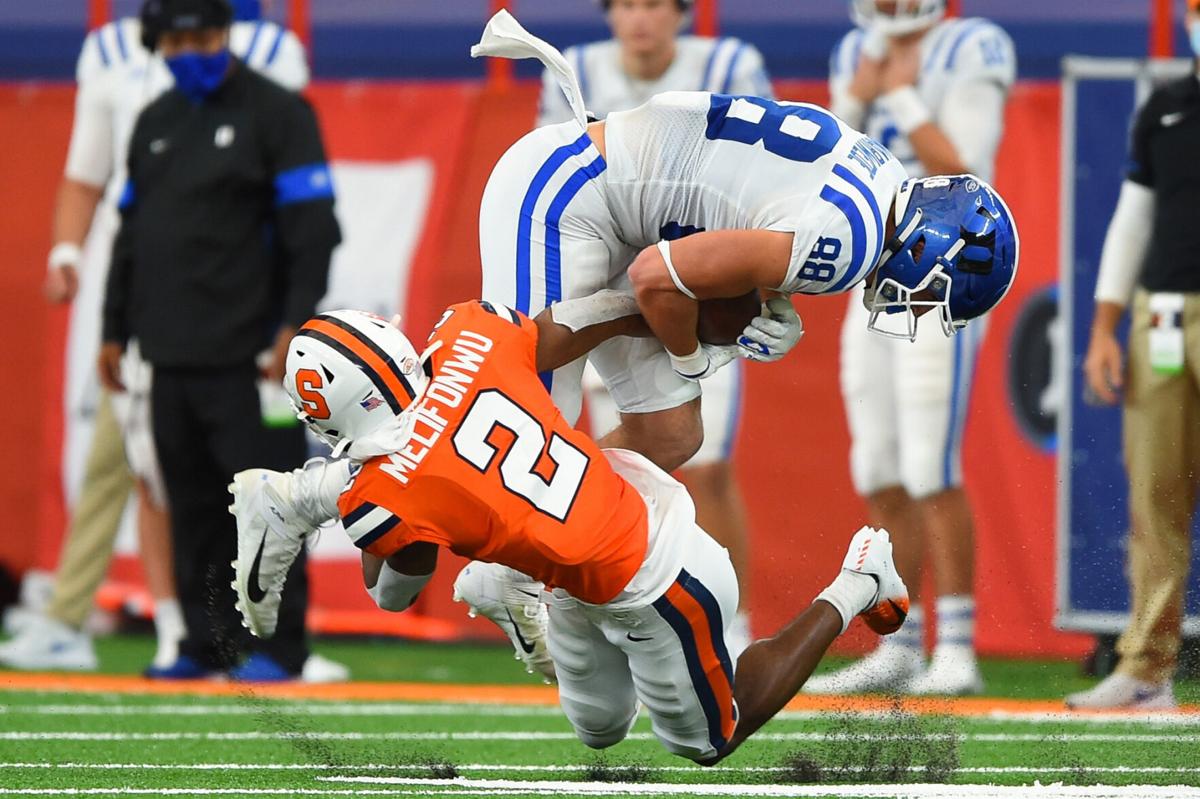 The Syracuse University football team will be represented by Andre Cisco, Ifeatu Melifonwu, and Trill Williams at the virtual 2021 NFL Scouting Combine.

The NFL will not host a traditional draft scouting event due to its COVID-19 health and safety protocol, but the trio of Orange defensive backs were among the formal list of invited prospects released by the league on Tuesday.

The NFL Draft is scheduled to begin on April 29.

Cisco and Melifonwu have been forecasted as potential second or third-round picks in recent mock drafts, while Williams is mostly projected as a possible day-three pick between rounds 4-7.

Cisco hauled in 13 interceptions in 24 career games at SU and finished the season as the active FBS leader and fourth in Orange history despite missing most of 2020 with a torn ACL. The ball-hawking safety is the only SU freshman to garner All-America honors.

Melifonwu ranked sixth in the ACC in passes defended (10) and fifth in pass breakups (nine) to garner AP All-ACC Second Team status and an invite to the Senior Bowl. He and redshirt freshman, Garrett Williams, combined to make the seventh-best cornerback tandem in the nation this past season, according to Pro Football Focus College.
Trill Williams logged 93 tackles, four interceptions, three forced fumbles and three touchdowns — scoring on a fumble recovery, a lateral following an interception, and a blocked punt — in 28 career games at SU. 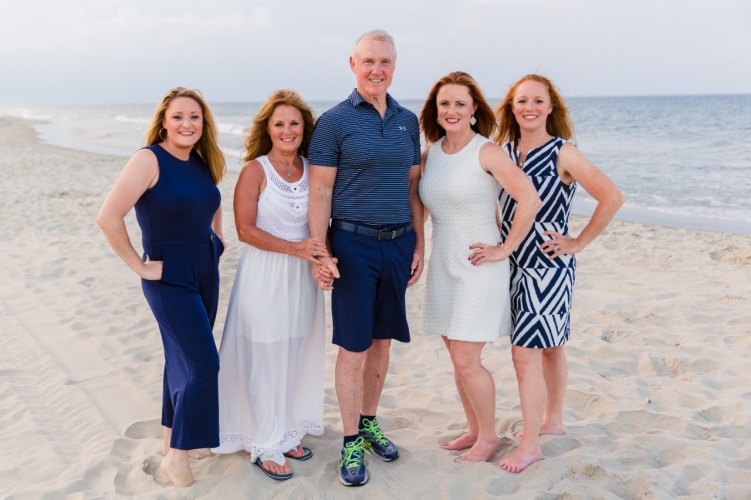 Where Are You Now – Dennis ‘Dink’ Blatt (tylerstarnews.com; Rutherford)

Located in upstate New York, Syracuse University is buried under some pretty deep snow by this time of year. It has earned its reputation as one of the snowiest areas in the country with an average annual snowfall of 124 inches. I can relate to this number. Spending 25 years along the shores of Lake Michigan in Grand Haven, you get used to not seeing the grass for several long months.

But I bet your Syracuse memories trend more toward the Mountaineers playing Syracuse in the Big East. Possibly you recall rowdy WVU fans belting oranges at Syracuse football players as a clear signal of the intense rivalry. In short, WVU fans don’t like Syracuse.

But you know what? There is a lot to brag about if you are a Syracuse fan. Did you know they have the biggest snow plow in the country on their campus? They need it. All kidding aside, here are some bragging rights Syracuse owns. President Biden is an alumnus of the Syracuse University College of Law, and the Carrier dome, home to the Syracuse basketball, football and lacrosse teams, is the biggest domed stadium on any college campus. And of course there is Jim Boeheim, Syracuse’s much loved men’s basketball coach. And there is one more important fact that has more of a hometown importance. Paden City’s own Dink Blatt was recruited to play football for the Orange and offered a full ride Division I scholarship. Now that is something to cheer about and is worth some bragging rights, too!

Dink Blatt was born in New Martinsville, WV in 1953. Dink grew up on Paden Fork Road, just two miles outside of Paden City, WV. Except for the 4 years that he attended Syracuse University, Dink has lived in our area making homes in Paden City, Marietta and Williamstown.
...

If it’s not a secret that FCS college football is having an exciting spring season, it sure seems like it.

Unless, of course, you regularly access ESPN+ or are employed by the Jacksonville Jaguars, assigned to scrounge every campus in America for late-round NFL draft prospects.

Highly classified information: The Citadel and Furman are among FCS teams with legally scheduled home football games on Saturday. S.C. State opens its spring season at home against Alabama A&M.

This Saturday, March 6. Not some Saturday in September.

Sadly, the most accessible channels within ESPN’s “Worldwide Leader” family of networks — and the powerful SEC and ACC — are widely ignoring an FCS spring season that opened with a full slate Feb. 28. It’s a major missed marketing opportunity for a sport leaking fans and participants.

“I was surprised,” Citadel head coach Brent Thompson said this week as he prepared for a Southern Conference home game against Chattanooga. “I thought everybody at the FCS level would have thought there would have been more TV coverage, or ESPN would have had some interest in it.”

You would think the people who run college football would realize FCS games are very good for promoting FBS interest and high school interest and interest in interesting football topics.

There is no official college football leadership, as we all found out when the NCAA was exposed as powerless regarding COVID-19 policy leading into the 2020 fall season.

We all know who really runs college football.
...

After years of struggles at the running back position, Khalil Herbert stabilized Virginia Tech’s running game in 2020. The transfer from Kansas was spectacular, rushing for over 1,000 yards and solidifying himself as a 2021 NFL draft choice.

While Herbert is now gone, the Hokies still return plenty of talent to the position. Raheem Blackshear should find a featured role next season. The Hokies never knew how to properly employ Blackshear in 2020, essentially wasting his talent at times.

Senior Jalen Holston should be Tech’s featured running back in 2021. Holston looked like a completely different player in 2020 and is poised for a breakout campaign.

Other players to watch are Marco Lee, Keshawn King, freshman Kenji Christian and a host of others.

Even with that depth, it didn’t stop Virginia Tech from adding another running back on Wednesday when UMass running back Jared Cole announced he was coming to Blacksburg.
...

Two-sport star Kaden Martin out of Knoxville Catholic announced Wednesday that he has committed to Miami.

The son of former Volunteers quarterback and assistant coach Tee Martin, Kaden is a 4-star dual-threat quarterback on the 247Sports Composite. In his SI All-American commitment blog, Martin mentions also having offers from Tennessee, Oregon and Arizona State. He also noted that some football coaches appeared reluctant to recruit him, noting his MLB Draft stock.

Gaby Urrutia of InsideTheU reports that Martin “will focus primarily on baseball.” In his blog, Martin indicated he considered both sports when choosing Miami:

They’re doing a great job this year on baseball and football is doing a good job, too. Can’t wait to see what they have in the future. Can’t wait to add on to their program!
Expand...

Under NCAA scholarship rules, if Martin plays both sports, his scholarship will be counted as a UM football scholarship.
...

McCaffrey announced he would be transferring to Louisville back in February, but the program made it official on Wednesday.
...

Due to the pandemic, the combine will not be held at event in one location, but rather at each prospect’s respective pro day. So, during Pitt’s pro day, which is scheduled for March 17, these six players will complete the drills they otherwise would have in Indianapolis.
...

I went with mostly Conference games only.

I think we all can agree it took us a while to get over some of these losses. They are ugly. pic.twitter.com/krJyCiJujZ
— Big Game Boomer (@ATL_boomer1990) March 2, 2021
Expand...

From MattSarzSports blog post "Sketching out Week 0 & Week 1 for CFB 2021", here are his best guesses* for the ACC games (with marquee matchups in bold; note: there are no ACC games scheduled for 2021 Week 0):

Here's a couple of excerpts from an awesome story posted on FBSchedules:

The 130 college football programs competing at the FBS level have home stadiums that range in capacity from Charlotte’s 15,314-seat Jerry Richardson Stadium to the University of Michigan’s Michigan Stadium, which holds a whopping 107,601. Regardless of the size, age, conference affiliation or success rate, each of these venues has a unique story to tell...
Expand...

Here are a couple of amazing stories involving ACC stadiums:

NC State’s stadium used to be a lake​

Earle Edwards was the head coach at NC State from 1954-70, earning a 77-88-8 record in 17 seasons. While that may not seem all-world, he won the ACC five times, including capturing three straight titles from 1963-65. It was good enough to get his employer to agree to build him a new football stadium, which was completed in time for the 1966 season. Carter-Finley Stadium – as it is now known – was built on 75 acres of land that included a small research pond.
A lake that had been [used] as a research fish hatchery was drained to help create the bowl of the stadium, while fields of alfalfa hay and corn were plowed under, cleared and leveled to create the expansive parking lots.
The seats for the new stadium were initially built into the sides of the old lake. The South end zone was left open, utilizing the pond’s original grassy bank for student seating and general admission, a feature that was enjoyed until the stadium was renovated in the early 2000s.
. . .

Georgia Tech’s Grant Field opened in 1915, originally consisting of a single set of concrete stands that held nearly 6,000 fans on what is now the west side of the stadium. The facility grew around this base, eventually reaching 40,000-plus seats in the late 1960s when upper decks were added to raise the capacity to nearly 60,000. It was during this set of renovations that it was decided it would be easier to build over the old original west side stands rather than remove them.
This means that those very first concrete bleachers, complete with seat numbers and the brick walls that encompassed the original structure, still stand. Only now, rather than being in the open air, they’re located in the bowels of the 2021 version of what has been called Bobby Dodd Stadium since 1988. While this hidden treasure isn’t open to the public, the space is used for storage. Follow the link to enjoy some amazing pictures.
Expand...

From AP: College Football Super Seniors Could Change Fortunes In 2021

Bret Bielema saw a unique opportunity to accelerate a turnaround at Illinois when he returned to college football as head coach of the Illini in December. The NCAA's decision to grant every fall sport athlete who played through the pandemic an extra season of eligibility meant Illinois could bring back a large group experienced players to be the foundation of Bielema's first team in Champaign... As of this past weekend, Illinois expects to have 17 scholarship super seniors, the most of any Power Five school... Texas Tech coach Matt Wells said his plan for success in Lubbock has been “get old and stay old.”
Expand...

“I can’t take into consideration the status of a victim in society,” Judge Stephen Dougherty began. “I can’t compare one victim to another victim.”

Still, the judge couldn’t deny reality: “We all knew Mr. Harris, knew him for the performer he was. He as a beloved member of the community.”

With that, the judge sentenced Jerrell Brown to 1 1/2 to 4 1/2 years in prison for the South Salina Street crash that killed Harris in April 2020.

After striking Harris, Brown, a parolee, fled and hid at his girlfriend’s residence until police caught up to him the next day, a prosecutor said.
...