You might have seen some of the players at Fan Fest... 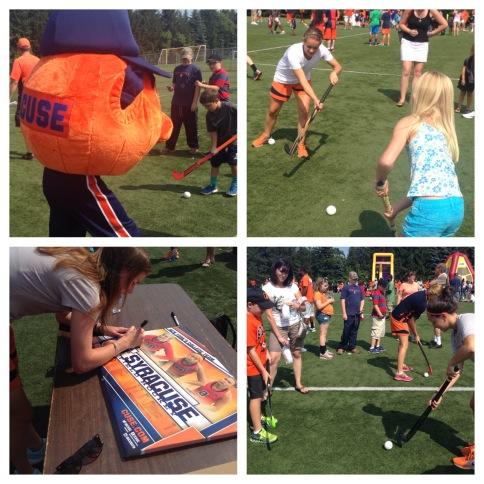 SYRACUSE, N.Y. - The Syracuse field hockey team's preseason is now in full swing! The Orange have about a week of practices in the books now and compete in their second preseason scrimmage on Tuesday. Cuse TV stopped by practice to see how things are going for the team that finished last season ranked No. 2 in the country in the final coaches poll.

The Orange open the season at No. 5 in the Penn Monto/NFHCA Preseason Poll for the second-straight season, after finishing the 2013 season at No. 2 following a 16-4 record in its first year in the ACC.

'Cuse was also one of five schools to receive a first place vote.

The Orange will kick off the season on Friday at Ohio State at 3 p.m., as part of a swing of four games in five days throughout Ohio. Syracuse will then take on Miami (OH) Aug. 30, at Ohio Sept. 1 and at Kent State Sept. 2.

Syracuse Athletics‏@Cuse 2h
Congratulations to Reed Kamyszek and Jordan Page! You are this week's Scholar-Athletes of the Week! http://bit.ly/1tXkF7f 9/16/2014 11:53:00 AM
SYRACUSE, N.Y. – The Syracuse University field hockey team was ranked No. 4 in the nation in the latest Penn Monto/NFHCA Division I National Coaches Poll, the NFHCA announced on Tuesday. This marks the highest the squad has been ranked during the 2014 season.

The Orange will host No. 11 Boston College in its next game. This will mark the second consecutive game SU will face a top-15 ACC opponent. The game is slated to begin at 1 p.m. on Saturday, Sept. 20 at J.S. Coyne Stadium.
Last edited: Sep 16, 2014
You must log in or register to reply here.
Share:
Facebook Twitter Reddit Pinterest Tumblr WhatsApp Email Link